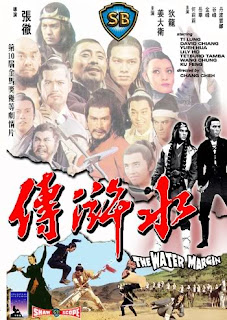 The topic of scale has not been broached in the Shaw Brothers marathon thus far. Admittedly, with the exception of Come Drink With Me, most of the films analyzed have been characterized by comparatively smaller scales than what one might be encouraged to anticipate from martial arts action adventures. Sets that clearly look like sets and not necessarily large ones at that, costumes that clearly look like dresses which only exist in the world of the movie, medium sized casts, etc. None of these elements are slights against the pictures discussed, only that the indication up until this point has been that Shaw Brothers rarely, if ever, ventured into making truly epic films. Chang Che, evidently enough one of the most prolific directors in the studios famed history, made strides to up ante by a considerable degree with his 1972 film The Water Margin, a film that tries to be epic on almost every platform imaginable including the actors’ credits if one can believe it.

Before the story commences, the viewer is treated to a scrolling text explaining that The Water Margin is, in truth, an important historical text in China. Written in the 14th century, it recounts the tales of various Chinese outlaws turned heroes and their battles against corruption and other evil entities in the 12th century. The 1972 movie concentrates on chapters 64-68 of this voluminous work. In it, audiences are treated to the story of how two well respected and highly skilled individuals, Mr. Lu (Teusuro Tamba) and his adoptive son, Xiaoyi (David Chiang), or ‘Young Prodigy’, became strong allies for the Liang Shan outlaw gang who were in the midst of a terrific ongoing battle of wits and skill against the powerful Shi Wengong (Toshio Kurosawa). The Liang Shan gang have earned themselves a notorious reputation, and when Shi Wengong vanquishes their leader, Chao Gai (Tung Lam), the de facto leader Song Jiang (Ku Feng) concludes that only Mr Lu and Xiaoyi are gifted enough in forms of combat  to help them properly avenge the death and their befallen, ‘heavenly’ leader. Thus begins a long and arduous journey to have them join their cause.

Chang Che and Shaw Brothers decided to put out all the stops for The Water Margin, one of if not the biggest Shaw Brothers film I have ever seen. So many motion pictures produced by the studio have had, for lack of a better term, a ‘studio look’ to them. Surely enough, said films have looked impressive in the past. One thinks of the colourful, almost dream-like cinematography and set design visible in another of Che’s works, The One Armed Swordsman, from 1967. For Water Margin, it was time to take the actors outside for real, resulting in multiple scenes featuring countless extras combating on vast, open landscapes. Here is a martial arts film that chooses to deal with the outside elements, something seen only very rarely in previous movies. One need only watch the opening scene of the movie, in which a series of war ships arrive at port of Shi Wengong’s massive, mountainous compound. A platoon of soldiers and emissaries emerge from the craft, hop onto their trusty steeds and proceed to race up the mountain as the opening credits appear. The scene lasts at least four minutes. Four minutes of about 30 men on horseback riding up an elaborate, twisty road up a mountain with little huts and barracks at every turn and more extras dressed as guards in each of those huts and barracks. It might be overkill to prove a point, but there is little denying how amazing the sequence is. The concluding battle sequence, while not as elaborate dressed up as the opening shots, is almost as impressive just for how many characters engage in combat, many of them with their own individualistic fighting techniques, not including the extras who pose as regular soldiers and do battle amongst each other.
From a purely visual standpoint, Water Margin is epic on several levels, and it hits home the point in more ways than one with regards to just how grand the picture is, sometimes in near comical fashion. Take for instance the sheer size of the cast how and they are presented. The five actors named in the plot synopsis above consist of maybe only 1/5 of the actors who get on screen credits throughout the film. Literally throughout the film. Virtually every time a new character appears on screen for the first time, even if they shall only play a small part, the actor in question earns a screen credit. This makes sense at the beginning of the film. The viewers quickly discover that the number of characters is, compared to ordinary films, practically innumerable. One can take a hint that not every one of these people will feature prominently in the story, which prompts the question as to why everybody is being billed as a star, but that is simply one of many funny ways how Chang Che and company are making it clear how massive the film is. The best part is that this continues after the opening minutes. There are characters that appear fifteen, twenty, twenty-five minutes after the start of the film and the actors in question are still receiving on screen credits! The acting is on par with what we have come to expect from Shaw Brothers material. Much of it feels over the top but functions well int he universe of the movie itself. David Chiang, true to his nature, is just as charismatic as is usual self. 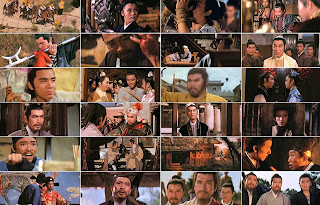 The music is another interesting topic of discussion. There is no hiding the fact that frequently Shaw Brothers films will generously borrow music from other films and television shows, sometimes music from American television shows. Where exactly the music featured in The Water Margin comes from is unknown to this movie reviewer, but it is brilliant, but again, a bit like with the acting credits, a ‘I can’t believe they did that’ variety of brilliance. There are only a handful of musical cues which appear, perhaps three or four at most, but most have a flute-jazz-funk beat to them, sometimes accompanied by a sweet female vocal simply singing softly s series of ‘ooh oohs.’ There might be a bit of like rock in there as well for good measure. Who in heaven’s name thought that this type of music would work in a film like The Water Margin is a mystery (I wish the DVD I own had a commentary), but it does. It is very romantic, romantic in a sweeping epic kind way.

The big question remains however: does bigger necessarily equal better? It is tempting to answer affirmatively given how joyous it is to experience all of the things we have discussed previously in this review. Unfortunately, the one element of the film that gets the shaft to a certain extent is the most important of all, the story. The story is not poor. For one, the film refuses to make any of the characters genuinely good or villainous. In fact, it may be safest to write that everybody is a little bit evil. Shi Wengong is obviously supposed to be the antagonist of the piece, and he does behave as such for the most, but he is not over the top evil. The protagonists are in fact the outlaws, and their way of dealing with problems is very much in touch with how a bunch of highly skilled martial artist gang members would. When they decided to dispatch someone, they really have a go at it, demonstrating absolutely no mercy nor compassion. Even the manner in which they liquidate their opponents is often quite gruesome, and if the Shaw Brothers decided to make the gore more realistic, the film would be the equivalent of a Friday the 13th movie in terms of blood and guts spewing out of the deceased. The dark nature of the characters makes for an intriguing picture, but the point A to point Z story is not The Water Margin’s strong suite. Once the Liang Shan gang makes contact with Mr Lu, the latter’s accountant conspires with his wife (who is cheating on him) to denounce Mr Lu’s new alliance with the outlaws. This results in a series of occasions when Mr Lu is jailed by authorities, then temporarily rescued by Xiaoyi, only to be re-captured by authorities shortly after. Mr. Lu is even sentenced to death twice in the film. Needless to say, it all becomes a bit redundant after all, not to mention that Chang Che inserts a few smaller, needless subplots, such as a love angle for David Chiang ‘s Xiaoyi character. There is enough there to retain the viewer’s interest, but the story is uneven on the whole. How ironic that in a film which has so many big elements to it, it is the story that seems to do so little.

It would a lie to write that The Water Margin is not fun. It is a heck lot of fun, sometimes for genuinely great reason, such as the scope, the cast and the decision to have ambiguous characters populate the world, other times for unexpected reasons, as with the music. Regardless, Chang Che’s epic is worth discovering for any martial arts movie fan.
Posted by edgarchaput