Last week on Labour Day Monday Mpix in Canada featured a Superman marathon, with the first three entries of the franchise playing back to back to back throughout the morning and into the afternoon. 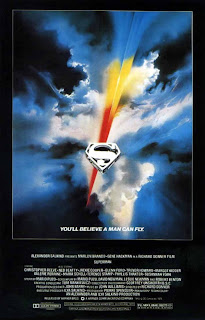 A baby humanoid alien being named Jor-El (the adult version played by Christopher Reeve) is sent by his parents from his home planet of Krypton, in the hopes that a better, more peaceful life awaits him than the violence which has engulfed Krypton. The kid lands on Earth in the United States, is adopted by a couple of farmers, and grows up to be a journalist in the humungous city that is Metropolis, going by the name of Clark Kent. His affections for colleague Lois Lane (Margot Kidder)) are not returned, but little does she know that Clark Kent is an alien being with incredible powers which trump even the greatest human capabilities (flying, laser emanating from his eyes, incomparable muscle strength to name a few). When danger calls, Clark Kent dons his blue and red spandex to protect the innocent under the name of...Superman!

The Superman films are revered by many, and for good reason. They are reasonably faithful cinematic translations of one of the most popular, beloved comic book heroes ever. I for one am not as big a fan as the die hards. I like comics in general and have a passing interest in Superman, but the character has never been one that has ever stuck with me in any meaningful way. Too nice of a guy? Too strong (literally) of a hero? A little of both, I think. Still, Superman: The Movie has some important things going for it, chief among them Christopher Reeve’s performance, which, when playing Clark Kent, is comically charming and, when playing Superman, is such that the character becomes so wholesome that one sort of can’t help but watch. One can’t help but simply like the guy. Interestingly enough, the film is at its strongest when it is dealing with the Clark Kent/Lois Lane relationship. It plays out in a classically comical way, with Kent being the shy, very nerdy and clumsy four-eyed chap practically no girl would ever go for (in the movies), all the while the intrepid Lane is enamoured with, who else, but Superman, Clark Kent’s real self. The scenes when Lane and Superman get to know each other, such as the interview atop of the condominium where she lives, are funny and memorable.

Oddly enough, is the Lex Luther (the great Gene Hackman) and Superman rivalry interest me less. Not that Hackman isn’t fun the role, for he is. That gleeful malice is very apparent an works marvellously.  I think part of it has to do with my general lack of enthusiasm for this rivalry, movie or comic book related. I mean, how is it that a normal human, albeit one with many resources and remarkable intelligence, can compete on such a serious level with Superman? It’s always come across as a bit silly in my opinion. At the end of the day, it still works fine in for the purpose of the movie, but it really is Clark Kent’s/Superman’s personal journey on Earth that energizes the film. 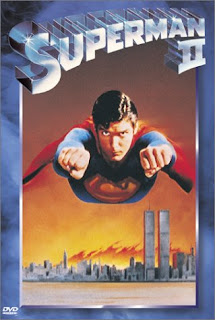 Back on Krypton, presumably in the past, a trio of hardened criminals led by Terence Stamp are finally caught by authorities and imprisoned in, I don’t even know what, a mirror that floats through space? Anyways, on Earth Superman saves Paris from a terrorist bomb attack by launching the device into space before detonation. Surprise, surprise, the bomb blows up in space just as that weird mirror prison passes by, thus releasing the group of bandits, who decide to pay our planet a visit. By the way, they like to destroy and dominate other, more primitive life forms.

Of all the Superman films, this is the one that seems to be loved the most by fans of the series. Much of that arguably has to do with the fact that finally a film presents formidable opponents for the man of steel. Physically formidable that is, given how Terence Stamp and his two followers are born with identical powers as Superman. One would think that this should lead to the most epic of battles, and yet it all comes across as rather petty. From the introduction of the villains at the beginning, to that silly mirror prison, to how they dominate local police forces in a rinky dinky little town when they first arrive on Earth, almost none of it...looks that good for lack of a better phrase. It should be big, and yet it feels small. I couldn’t figure out why the supervillains would stick around with Lex Luthor for so long, not to mention that Stamp orders for his execution every time he has outrun his usefulness The villains themselves are rather boring as well, with the exception of a few unintentionally funny lines from Terence Stamp. His two companions are as dry as sand paper as far as characterization goes. Even when the fighting starts, I never got the sense that the filmmakers had pulled off something impressive. Once again, the best parts of the film are when Lois Lane and Clark Kent interact, especially since this time she actually suspect that he and the man of steel might be the same person! This is by far more interesting than any of the supposed epic fighting Superman is engaged in the rest of the time. 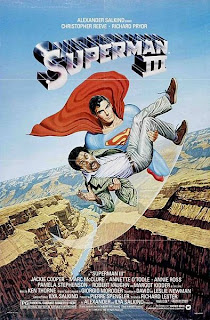 With Lex Luthor out of commission for a while, two new villains emerge. One is a wealthy and crooked entrepreneur played by Robert Vaughn. The other his chief technician, an unlikely computer wizard played by Richard Prior of all people! Prior’s character is dead broke at the start of the film, but after taking some computer classes discovers a gift for hacking into systems. Vaughn employs him for a series of dastardly deeds and, in an attempt to stave off Superman, they create a sort of synthetic kryptonite that turns him into evil Superman.

And so my opinion of the films continues to diverge from the norm. I genuinely thought Superman III was entertaining. At times it’s insane how ridiculous the film is. I mean, Richard Prior is one of the villains! It isn’t as though he plays his character in a tough way, like a true baddie. Rather, he plays as Richard Prior would, that is, mostly for laughs. Some of the conversations between him and Robert Vaughn are hysterical, such as how Prior recounts how Superman foiled Vaughn’s plans to create a storm in Latin America that would destroy its agricultural based economy. I don’t think there is a funnier scene in the movie.

The counterweight to all of this hoopla is the subplot about making Superman evil. This plays out very effectively in the film, with Christopher Reeves giving a fantastic performance, specifically in the junkyard scene where he plays both a darker version of Superman and Clark Kent, as if the two had literally been split into two. I have no idea how that works or even why that would happen if Superman tuned evil, but it nonetheless makes for one of the franchise’s most memorable moments, if also one of its most bizarre. The movie also aims at a different love angle, essentially ditching Lois Lane and sending Clark Kent back to his adoptive home town of Smallville for a high school reunion where he sees Lana Lang (Annette O’Toole) so many years. A little odd that after two films that played with a Kent/Lane angle, Richard Lester would suddenly decide to drastically switch gears, but I can’t say that they do a poor job of it.

I’m somewhat at a loss for words in order to defend myself for the appreciation I have for Superman III, a film I know a lot of fans dislike, maybe even hate. If it’s worth anything, my guess is that it goes back to what I wrote earlier in this column: I’m simply not the biggest Superman fan, so a attempt to go in a totally different direction attracts me. What can I say...

I like how the recent rereleases downplayed the comedy in the 3rd movie and didn't even put Pryor on the cover art.

Have you seen the Richard Donner cut of the second movie? I haven't but would be interested in what the differences are.

@Mike: I have not seen the Donner cut. From what I have read and heard, it's worse than the original theatrical cut, with certain footage not properly cleaned up and weaker special effects interspersed.