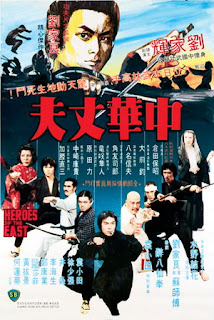 Heroes of the East (1978, Lau Kar-Leung)
Marriage. There is almost nothing like it. Harmony and bliss with the one person with whom you feel the closest to in the entire world. The love which binds two people together so strongly can emanate from any number of things, such as common interests, even in the smallest of things. It is interesting how some marriages and various other relationships can come undone by matters one least suspects. Pride, for one, can be a mighty big killer, especially if one has too much for one to swallow and thus must abide by it. Such is the dilemma facing the central couple in Lau Kar-Leung’s 1978 classic film, Heroes of the East, who not only come together because of their shared love for martial arts, but eventually grow apart due to their respective adherences to the disciplines they know best, which, in the case of the historical China-Japan rivalry, can be a tremendous matter of national pride, enough to wash away whatever love once existed.

Ah To (Gordon Liu), one of the finest practitioners of Chinese kung fu in his locality, learns that forces beyond his control have ensnared him in a fixed marriage. The bride to be is Kung Zi (Yuko Mizuno), a Japanese girl he once knew long ago. Distressed by this alarming news, Ah To is ready to be as bull headed as ever in his attempts to thwart the union. His negative vibes melt away instantly when Kung Zi finally shows up. She is a stunning beauty if there ever was one, appears sweet enough and, best of all, is a martial expert herself, albeit gifted with the Japanese art forms rather than Chinese. The marriage goes as planned and both live happily until the day when they choose to practice with one another. People who pass by behind their garden walls by are under the impression that Ah To is in fact physically beating his wife. What’s more, Kung Zi is a staunch believer of the superiority of Japanese art forms over that of the Chinese. Their practice bouts frequently result in Ah To emerging the victor, thus enraging Kung, who returns to Japan for words of wisdom from her sensei (Yasuaki Kurata). Marital and cultural misunderstandings lead Kung’s former Japanese school to send over seven of its greatest students to fight Ah To and prove just which country has the best fighting styles.

This movie reviewer’s growing adoration of martial arts films only begun a short time ago, perhaps three years at most and, as a result, the amount of such movies viewed is limited when compared to the near incalculable entries in the genre in existence. Chances are if one only takes into consideration those generally understood as classics (a nebulous term, but it will suffice this one time), the amount catalogued in my memory is still marginal at best. Nonetheless, the more one discovers, the more one can refine one’s tastes. At this point in time, the author’s knowledge of martial arts films, limited as it may be, is sophisticated enough to understand just how good Heroes of the East is. Here is a film whose riches can be observed in the characters, the performances, the story and the themes. Most importantly, it combines two of my favourite martial arts cultures into a single film: that of the Chinese and Japanese. A surface level viewing of the film would only lend a half-hearted appreciation of the film’s merits. The Japanese, as in so many of these films, come off as the antagonists while the Chinese protagonist is clearly the individual audiences should be investing their emotions in. True enough, the overall mood of the picture, as well as the depiction of the characters, support that view. Closer inspection reveals that Lau Kar-Leung’s film is much more layered than that simplistic, reductionist analysis. 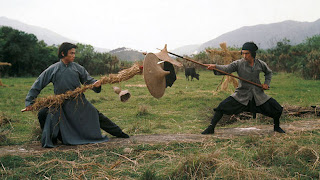 For starters, while the anger and frustration demonstrated by Kung Zi upon being ‘defeated by her Chinese husband is fuelled primarily by her conviction that Japanese martial arts are better, it is not as if Ah To is apologizing for anything either. Just as his wife believes the Japanese are more convincing, he in turn believes the Chinese do it best. This unfortunate situation is brought upon by each individual’s sense of deep pride felt towards their respective national disciplines. Neither is willing to give in to the other, to admit that perhaps they are on equal footing. Director Lau not so surprisingly makes Ah To appear as the more sensible of the two, but there is little denying that each is being stubborn in their own way. Hence the film tackles the issue of marriage in very unique light, not to mention that the viewer is faced with a couple formed by a Chinese man and a Japanese woman, something frowned upon back in the day (and, who knows, maybe today still by certain people from both countries). It may all be played in simplistic terms for everyone to follow along easily enough, but the emotions involved make this aspect of the story very significant. Where once was love now there is none (or less), and that classic human trait of national pride has reared its ugly head for the worse. It is also just a lot of fun if a viewer is familiar with Chinese and Japanese martial arts films and now gets to see a couple from each discipline start arguing over whose skills are best.

Things truly kick into very high gear once the seven Japanese masters and their sensei arrive in Ah To’s district to teach him a lesson. What follows is a series of encounters over the course of a few days in which Ah To, a practitioner of several Chinese styles, must defend not only himself but his nation against a posse of deadly Japanese. Literally the final hour of the film features karate against kung fu, sai against short butterfly knives, samurai sword against Chinese jian, ninja against esoteric arts, etc. This culminates with a final confrontation between Ah To and Kung Zi’s sensei, played by the legendary Yasuaki Kurata, who would later play in yet another martial arts classic involving a rivalry between the same countries under almost identical circumstances, Fist of Legend. With the exception of one fight between Ah To and a Goliath-esque man which feels a bit too silly for its own good, each of the individual encounters are exciting in their right and fascinating to witness for the clashing of two disparate styles. The nature of the films gives Ah To the upper hand every time, but I feel as if Heroes of the East still gives a nice indication of what happens when styles collide. Yet another of the film’s positives aspects is how, despite its less than positive depiction of the Japanese, they rarely come off as genuinely bad, save the one martial artist would has taken a liking to Kung Zi. There are even moments of cultural misunderstandings after and before fights which see Ah To in the wrong, such as when the first combatant, the samurai sword expert, finally accepts defeat and acts out a traditional gesture of handing over his blade to Ah To. The latter does not comprehend this and backs off, thus insulting the samurai. It’s a great moment in as far as it reinforces this notion that everybody involved in this mess is only a few tiny paces away from getting along, yet the barriers remain. The ending of the film shall not be divulged, but it should be noted that unlike in many other films of this ilk which see Japanese attack the Chinese, there are respects paid by both sides by the time the dust has settled. An acknowledgement is made about how, if one can peer in for inspection a little closer, Japan and China are more similar than they are different, and what clear differences do exist should not be reasons for strife.

Heroes of the East is wonderfully directed by Lau Kar-Leung, who holds back enough on making the Japanese look like nothing more than thugs in the face of Chinese angles, and even shares ideas of reconciliation between the two nations. Above it all, the action is purely amazing.
Posted by edgarchaput