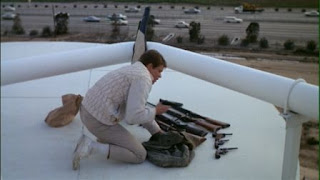 Peter Bogdanovich's Targets is a strange beast in of itself and contains a strange beast within itself. The plot and running time are evenly split into two halves. One is an intimate look into the life and feelings of an 'over the hill' actor (ironically played by Boris Karlof) who, unsatisfied with the last few films he has starred in, decides to call it quits, despite pleas from the studio and an young gun-ho director (played, ironically, by Peter Bogdanovich). The second story involves young soldier, who has just returned to the States from the hell that was Vietnam (the war, not the country). He's polite, articulate, has a darling wife, but all this matter little in the end for he is mentally an emotionally scarred. Make that troubled. Having equipped himself with some fine riffles, he begins a killing spree like no other.

I won't go further, but you can probably tell that the two stories will collide sometime before the end of the film. What's fascinating is how Bogdanovich uses these two different stories so effectively. Karloff is superb in the role of the tired old character actor searching for the peace and quite of retirement. He's funny at times and often delivers his lines in such a way that I always felt a certain truth about the character. The mere fact that Boris Karloff is playing the character, and with such believability, adds a richness to the story arc. I had never seen Karloff actually act a part that asked for subtlety and smart comedic timing. Bogdanovich, as the young director, is quite fun as well, merely because he gets to play a young, slightly cocky director. Nancy Hsueh is adorable as Karloff's overly qualified but always supportive secretary. Bogdanovich and Hsueh don't get many scenes together but the ones they have are cute.
Tim O'Kelly (who looks a lot like Matt Damon...) is more than just effective as young Bobby Thompson. In many of his early scenes he appears to be your typical 60s polite suburban Caucasian chap. But underneath lies a beast, one that he can't control (or that has taken over him I should say). The first few scenes that hint at O'Kelly's disturbed nature are exquisitely set up. There is something terrifying about him, make no mistake about it. His first murder scene is a jolt to the senses. It comes quickly and without remorse. The shock factor is at the top of the scale, but without ever resorting to cheap tricks however. The murders are as disturbing as they come because they are filmed in such a way that it always feels real. This can happen (and has unfortunately). Nothing is glorified here.

The only question that remains is why have these two seemingly opposite stories told in the same film? The reasons may be numerous. The most obvious one being a social commentary on the destructive Vietnam war and its affect on people who were probably once good. Another could be a juxtaposition of a story about an old man who's lived a full life and feels that he's done his time against another that showcases a much younger man who hasn't accomplished very much and is throwing his life away, thus making a strange but I suppose reasonable argument about youth, recklessness and maturity. Paranoia in all its forms perhaps? A more aesthetic theme could be that of fictional monsters (played by Karloff throughout his character's career) and real life monsters (war and its genuine consequences) who cause real damage.

The answer is decidedly murky, and that's how it should be. What's the fun in being spoon fed a specific message from a director after all? I like that fact that nothing is really explained, even though it's quite evident that the links, whatever they may be, are there.
Posted by edgarchaput 1 comment:

Kikujro begins with a young lad, Masao (Yusuke Sekiguchi) at the start of his summer vacation. He lives with his grandmother for his father has passed away and his mother left him at the earliest of ages. Masao stumbles upon a photograph of his mother and suddenly has a newly found urge to finally meat her, even though she’s in another city. To reach her, Masao is accompanied by Kikujiro (played by the director but credited as Beat Kitano), a friend of the family and a real grump. Oh, the adventures these two seemingly incompatible characters will have!
Kikujiro is played in rather straightforward fashion. It goes for emotion, whether through laughter or tears (none shed by this reviewer unfortunately) through a series of episodes that highlight the bonding relationship between Masao and Kikujiro. At first it seems like this may be the young boy’s movie, but I could tell why Kitano’s character gets the title of the film ( I watched the film with French subtitles, and the movie was called ‘Kikujiro’s Summer’ a nice title I might add). Masao's character doesn’t really develop at all throughout the story. It isn’t a ‘coming of age’ film for him. Rather, we see Kikujiro, who at first we detect as impolite, impatient, brutish and at times and opportunistic, as the character who changes and grows as the movie moves along. He speaks in rather vile terms towards most people they come across and even little Masao, but eventually just like in all bonding that should abide by a formula, Kikujiro’s temperament shifts eventually… to a certain degree. I think that’s why I liked the character of Kikujiro. Obviously he can’t possibly remain the same ogre he was at the beginning, otherwise the story arc will have gained nothing. But Kitano doesn’t change him too much, he still keeps his hard edge, even though it becomes obvious that he’s rather fond of the boy by the end. Kitano sells the character convincingly thankfully.

The movie rests on his shoulders and he delivers, even though many of the ‘comedy’ moments didn’t necessarily satisfy my sense of humor (it was a bit too cutesy at times for me). There is a host of secondary characters that we meet along the way, and, while they are fun to a certain extent, I had the impression that they didn’t always feel real, or well developed. It felt as though they were merely there for Masao to have fun. I understand and even like the idea of the ‘unforgettable summer’ in which you meet new people and interesting people with whom you become friends, or at least keep in your memories, but I didn’t have the impression that the supporting cast was playing full fledged people. For those who have seen the movie, I know that there’s a host of counter arguments for what I just said, but that’s where I stand nonetheless
Posted by edgarchaput No comments:

In Depth Review: Ashes of Time 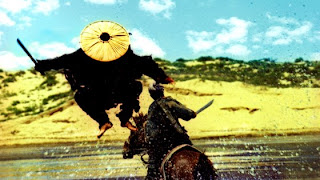 I haven’t seen many Wong Kar Wai films, but judging from the ones I have seen, he concentrates very much on telling tales about people falling in and out of love using superb aesthetic qualities to translate the emotional resonance he intends on sharing with the viewer.

Well, Ashes of Time of Time is undoubtedly a tale of about love (among other things), and it’s clear from the get go that visually and musically Wong is prepared to serve the dish with a particular flare. Ashes main character is a swordsman, Ou-yang Feng played stoically by Leslie Cheung, who lives in the desert and acts, for the lack of a better term, as a gun for hire. People know he ‘solves’ problems, they come to him, offer a wage, and he’s off with his sword to take care of business, literally. Other times he sub contracts his job to other swordsmen. The story behind the story is far more complicated however, probably intentionally so from Wong, and actually involves and old lover who Cheung never told he loved her and has now married his elder brother. This aspects haunts Feng throughout the film.

Wong’s film will challenge the viewer, especially if he or she has trouble remembering names. There really are a lot of characters in the film. It was, admittedly, a bit difficult figuring out who was who. Tony Leung (from Chungking) plays a blind swordsman, another Tony Leung plays a swordsman who has stumbled upon a wine that causes memory loss, Brigitte Lin plays a women Tony Leung was supposed to marry but didn’t AND plays a women disguised as a man who wants to avenge Tony Leung’s behavior, etc. The list could go on for a while… To make matters worse, not all of the story arcs retained my interest. The ones dealing with loves that had turned to tragedy did however. There is something rather poetic about the script, the characters and the tone of the film. It certainly isn’t easy to sit through, but if you can make it all the way through, you’ll be rewarded with a special experience. Many of these characters are stoic towards their love, yet it’s clear that many of them are suffering in some way or another. The main character for instance has made a conscience decision to leave his past and now must live with the consequences, despite the emotional scar he carries with him. If he could forget his past, then things would be fine, but forgetting such a past as his is next to impossible. Interestingly, this is shown in two clever ways in the film, although I won’t spoil them here. There’s no turning back.

To add to the mood is the visual splendor of the film. Several shots would be worthy of having as posters. I also didn’t know what to expect from the action sequences. They aren’t of the highest quality overall, but there are some interesting surprises, one of them being a character who blows fire off the tip of his sword. No, that last phrase wasn’t a typo.

Not my favorite Wong movie amongst those I have seen, but still worth your time if you like your sword fighting movies to have a rather psychological and introspective flavor to them.

Posted by edgarchaput No comments: 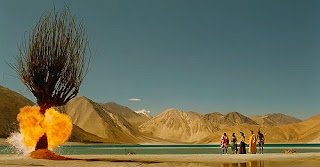 A young Indian girl, Alexandria (Catinca Untaru), injured during a fall while picking fruit, befriends an injured stunt double, Roy (Lee Pace), who's resting at the same hospital. No longer able to walk but desperate for drugs to sooth him, the stunt double gets Alexandria to steal drugs from the medicine cabinet in exchange for hearing an elaborate and fantastical story.
By the end of this film, I had the sentiment that I should have seen this in the theater.

At the risk of sounding obvious and redunant, The Fall treats the viewer to a unique visual spectacle. It's like a beautiful painting, only that it's moving. Colors are rich, the cinematography succeeds in getting as much 'oomph' in each shot as imaginable. Thankfully, the film doesn't sacrifice its story or characters. The bonding (even though there are ulterior motives involved) was touching and well written. Young Catinca Untara simply gives an honest and believable performance, which is more than we can say for countless other child actors. Lee Pace's devious nature may appear as cold to some, but it serves the purpose of the story very well and, I felt, enhanced the process of their bonding even more later in the story.
IMDB has 2006 as the year for The Fall, but it was released in North America earlier this year, so I'll just go ahead and say it's one of my favorite films of the year so far.

Want to read more on The Fall? Check out the review at M. Carter at the Movies.
Posted by edgarchaput No comments: