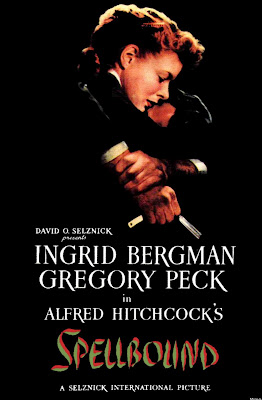 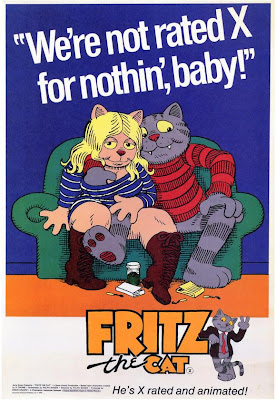 The following statement is based solely on an educated guess, but it seems as though it is in the domain of animated feature films that the divide between the mainstream and the independent is most pronounced. Newspaper reviews from the Arts section and even the Oscars can help increase the life span of an independent live-action film in some instances, even though that too is never a guarantee. Yet when it comes to animation, those movies which stand proudly outside of the mainstream do seem relegated to perpetual obscurity, that is until one either stumbles on the film by happenstance or it is mentioned by somebody already familiar with the title. Heavy Metal is one example. Fritz the Cat, based on a very counter-cultural comic strip born out of the curious mind of Robert Crumb, is another. It comes as no surprise that its director, Ralph Bakshi, also made a name for himself by directing several non-mainstream, independent animated films.
click to read more
Posted by edgarchaput 6 comments:

A two for one Far East Special today for the readers (a 'capsule reviews' version of Far East Specials in a sense). Curiously enough, Between the Seats has never seen the original Ong Bak film, although cursory research revealed that the second and third films in the trilogy have next to nothing to do with the original. In fact, they consist of a two-part prequel which occurs about 600 years before Ong Bak, the story of which was set in present day. 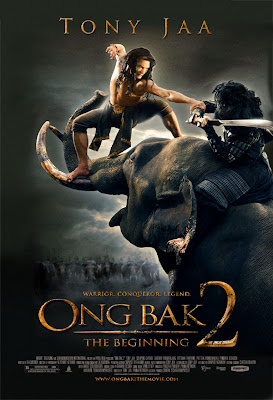 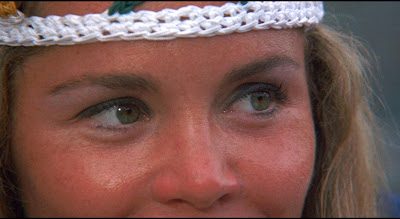 If the BBS line of films, which went from the late 60s into the early 70s, consisted of artistic works exploring the oft overlooked aspects of American society and culture, then they would have been remiss not to have at least one movie offer a female perspective. Sure enough, several of the previous films in the marathon, which is operating in chronological order of their theatrical releases, have offered some significant female characters, but never at the very core of a story. Sometimes close, but never quite there. Along came Henry Jaglom in 1971, a man whose career concentrated predominantly on theatre, who was (and still is) keenly interested on the woman's perspective of life in general and what the woman's version of humanity's endless struggle to find its own place in the world is like. On case some perceive it as presumptuous for a man to have made such an attempt, it should be noted that on the Criterion Blu-ray supplements, the director reveals that several film and genre study professors have shown A Safe Place to classes of women, without telling them who had made the picture. They usually love it and are shocked to learn afterwards of the director's gender.
click to read more
Posted by edgarchaput 2 comments: 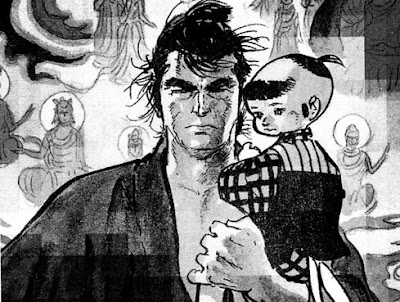 A full appreciation of the article that follows rests on one's familiarity with Bill's review of Sword of Vengeance.

The rebuttals from my end have, at this stage of the Comica Obscura marathon, felt inspired by the pictures upon which the discussions have been based. For The Rocketeer, who was a character that took his battles to the sky, the response article was characterized by some high and mighty pseudo intellectualism related to nationality and how one's attachment to country their of origin results in particular viewpoints on a film, an attempt to 'elevate' the discussion to another level just as the protagonist 'rose' to the occasion in his adventure. For Kenji Misumi's Sword of Vengeance, or, as you obsess in writing it, Kozure Ôkami: Ko Wo Kashi Ude Kashi Tsukamatsuru, the battle falls back to earth. In truth, I have re-read your review a couple of times and on each occasion its briskness has posed some problems for a rebuttal, which forces me to get into the nitty gritty of your analysis. Like the samurai, I shall approach your points delicately, with precision, and strike with a fury when the opportunity arises.
click to read more
Posted by edgarchaput 2 comments: 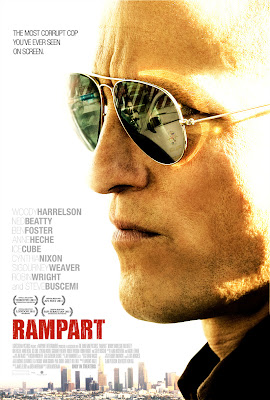 Crooked cop dramas always have a place in the movie landscape, and it has been the case for decades already. The police are, after all, the recipients of both public outrage and praise. They live to serve and protect, yet occasionally exhibit behaviour so far below the standards which must be adhered to that it becomes small wonder many frown upon them. There is a fascination in seeing this duality develop on screen. Whether said interest rests in the satisfaction derived by some in seeing the reasons for their hatred of cops explored on film or merely out of some perverse pleasure in seeing good people become bad (or bad people pretending to be good under the guise of a badge and a gun). After working together on 2009's The Messenger, actor Woody Harrelson and director Oren Moverman join forces yet again for Rampart, which premiered at last year's Toronto International Film Festival and has been rolling out since across the North American market.
click to read more
Posted by edgarchaput 3 comments:

Happy Valentine's Day! In an attempt to totally forgo whatever warm and fuzzy emotions February 14th typically inspires, here are three reviews for films a colleague at work was kind enough to lend me on DVD, all three of which feature murder, mutilation, rape and torture. Enjoy! 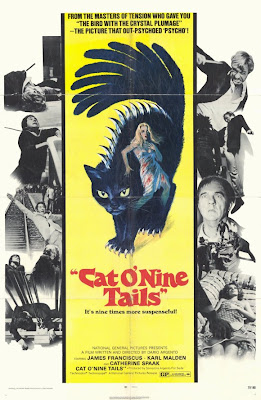 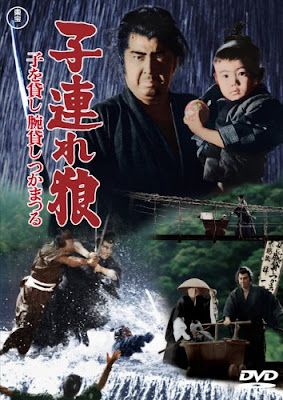 Just as comics and cowboys have been staples of Western entertainment for decades, samurai and manga have earned a rightful spot in Japanese culture. In fact, the sheer number of stories created for the aforementioned black and white Japanese graphic novels is staggering. Many have earned themselves significant reputations beyond the borders of their native country, as have films depicting the exploits of the samurai, be they of the legionary variety or master-less. It comes as no surprise that the two have merged into one for numerous books series. Among those that have reached degrees of popularity in the West is Kazuo Koike's Lone Wolf and Cub, which shared the tale of a former government employee who, after a shocking betrayal leaves him without honour or a wife, traverses Japan on a quest to right the wrongs done to him and his infant son, whom he brings along in a baby carriage. In 1972, only two years after the story's initial publication, the series was brought to the silver screen by director Kenji Misumi, the first film titled Lone Wolf and Cub: Sword of Vengeance.
click to read more
Posted by edgarchaput 1 comment: 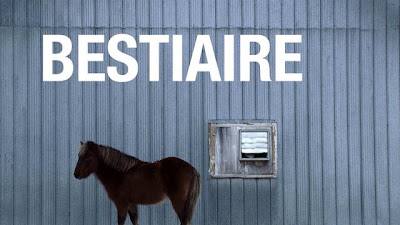 It barely over a year ago that Québec filmmaker Denis Côté charmed and mystified audiences with Curling, a lyrical, quiet and subtle story about the relationship between a socially inept single father and his daughter, whom he preserves from ills of the world in hermit-like manner. Showcasing an enviable ability to surf from one genre to another, director Côté returns with a documentary about the animals which parade in and around Parc Safari (located just outside the city of Montreal), both during the summertime when they come out to strut their stuff and during the bitter winter period when kept under close scrutiny by the caretakers in confined spaces.
click to read more
Posted by edgarchaput 1 comment: 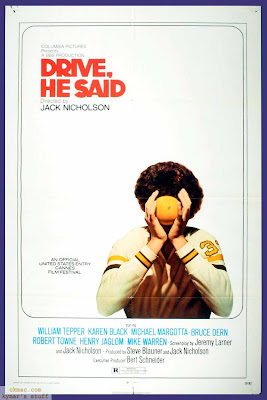 The further the BBS Productions Presents marathon explores the company's filmmography, the more it becomes apparent that eventual mega star Jack Nicholson was one of the driving forces behind its creativity. It began with a film stealing supporting role in Dennis Hopper's Easy Rider, followed by a starring role as well as a writing credit for Rob Rafelson's Five Easy Pieces. Then, in 1970, the time came to make the biggest leap of all: the director's chair. He would not return to said chair very often in subsequent years and decades of his career, yet that should not be a sign that his work as a debutant was unimpressive. Just as he took many by surprise with his early acting work in the previous BBS films, Drive, He Said demonstrated that Nicholson possessed a tremendous amount of honesty and maturity as a storyteller from behind the camera.
click to read more
Posted by edgarchaput No comments: 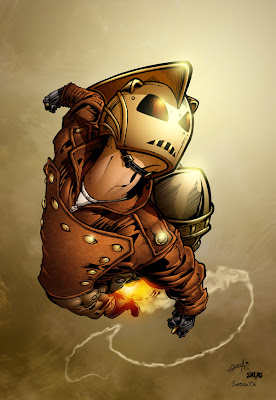 This article will contain some mild spoilers.
In order to better understand what this article is discussing, please go read Bill's review of The Rocketeer, published last Sunday.

It is with a decidedly peculiar twist that our Comica Obscura marathon began with last Sunday. What was obvious to anyone who paid a visit to your Movie Emporium and Between the Seats is that we each published our respective The Rocketeer reviews, in which we espoused the merits of Joe Johnston’s lively comic book adventure film heavily influenced by the adventures of a period long past our 21st century hipster era. Indeed, those who read articles came away with the idea that both us enjoyed the film. True enough.
click to read more
Posted by edgarchaput 2 comments:

Opinion piece: Watch and learn on DVD and Blu-ray 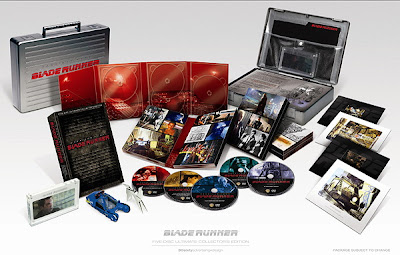 A few days ago a fellow blogger you most surely know well, Bill from Bill's Movie Emporium, published an interesting article about his opinion on DVD and Blu-ray supplements, or 'bonus features' as they are typically referred to on the back of packaging. It was a good read, as is often the case whenever I happen to pay his site a visit, although it was mostly the case just because it allowed me to know about more about the side of things from someone who does not, in fact, care much for the added content on home video formats.
click to read more
Posted by edgarchaput 7 comments: 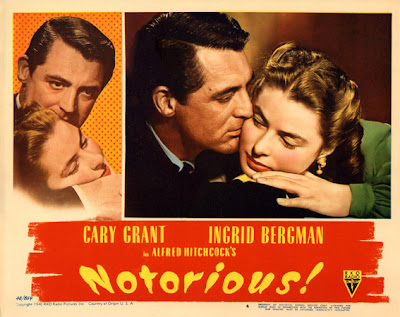