This is a bit of information I could have posted a few weeks back but never got around to doing so, so I do apologize. The news in question is that yours truly is now a writer for The Reelists, a website I believe I've mentioned a couple of times before on this blog. It was started by some Filmspotting message board members and has grown a decent bit to include contributers from across the web.

In fact, The Reelists are starting to gain exposure to the point that two contributers have started the site's official podcast. Yes, they have a podcast called The Movie Dictator Club. While it is still young, I can assure you it is a quality product. So make sure to check out their site because a) It's darn good, and b) because it features my column, 'Flip Side of the Frame', in which I take a brief look at one strong and one poor performance from the same actor. The column might not appear on a weekly basis, but I hope to make it a fairly regular column on their site.

In cooperation with Bill from Bill's Movie Emporium, although his other blog, The Domain of Nihilus, might be used by him instead.
Posted by edgarchaput No comments:

Whatever happened to that 'queer cinema' marathon? Excellent question, I'm glad you asked.

Life happened. It is as simple as that. Work, social life, etc, etc, etc. The mere fact that I posted in-depth and reasonably lengthy reviews on a rather consistent basis (6+ times a month) for 1 1/2 years surprised even yours truly himself. I honestly thought a lengthy forced hiatus on my part was going to occur way sooner in the existence of Between the Seats. Well, it happened now.

Okay, so regarding the 'queer cinema' marathon: Yes, it will still happen, but not at the pace with which the other marathons have developed up until this point, that is, a breezy 1 to 1 and 1/2 month blitz through a director's work or various movies within a single film genre. The reason being that whenever I asked readers of the blog to vote on a future marathon's topic, the more indie/art house topics always won.

That in of itself is fantastic. Even before I changed the format of Between the Seats to a strictly marathon inspired format, I think it was evident that I had an eclectic taste in film. Between the Seats was never a 'review the Friday Hollywood release' kind of blog, even though there were the occasional reviews of the recent big budget productions. The thing with an entire marathon of indie/art house films is that those movies are not necessarily easy to find. There was a time when Between the Seats was still young that your host made use of...less than legal means to acquire all those non-English language movies I reviewed. I just picked and chose what sounded interesting and clicked a button. Last autumn however, I made a commitment to stay clear of illegal downloading. As it stands, if I'm watching an art house or indie film, it's because I borrowed it from the local library or one of the local multiplexes where I live felt generous enough to play it for a few weeks.

Do you have any idea how hard it was to do that 'Female European directors' marathon?!? I'm exagerating of course, but still.

So again, the 'queer cinema' marathon will occur, please rest assured. But don't expect it to be a '1 review/week' type of marathon. Having said that, I think it is high time we get back on track here at Between the Seats. No more hiatus time. Within the next week, more reviews will start pouring in, but a bit like I did in December with the 'Long arms of the law' marathon, I'll be choosing some easier topics (movies I can easily acquire). 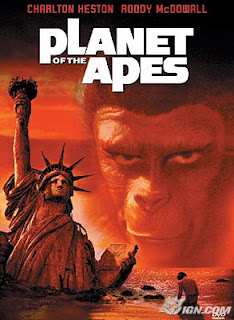 Two franchises will be studied in the coming weeks. The first shall be the original Planet of the Apes series. I watched the entire franchise recently and would very much enjoy spilling some of my thoughts on those films.

I think the one project that promises quite a bit will be a 2 blogger Star Wars marathon. Yes, a 2 blogger marathon. Every now and then I'll post a link to reviews writte by other bloggers I know at the end of my reviews. I'm sure you've noticed that I've posted a few links to Bill's Movie Emporium. Bill is a massive Star Wars fan. I myself used to be a good fan, but over the years my interest has waned somewhat. I haven't watched any of the Star Wars films in at least 5 years, some for an even longer time. What would I think about them now, several years onwards and with considerably different film tastes from 4-5 years ago? We'll find out in the coming weeks. The finite details of how Bill and I will work the marathon out shall be revealed soon, but we do truly want to make it a team effort, with similar formats on our blogs, to the point where it will seem that we practically watched the films in the same room and spoke about them together (impossible, as we don't even live in the same countries).

Stay tuned. Oh, and sorry for being away for so long.