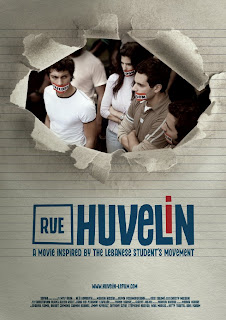 The release of Mounir Maasri’s Rue Huvelin feels timely considering the recent socio-political uprisings which have led to dramatic regime changes in parts of the Arab world since the start of 2011. Tunisia, Egypt and, about two weeks ago as of the writing of this review, Lybia have all undergone significant change due mainly to the populations’ threshold of tolerance towards their respective dictatorial regimes being smashed. Push came to shove one time too many and it was now the turn of the government’s stranglehold on power to be smashed. Rue Huvelin’s concern may lie with another Arab country, Lebanon, but takes a look at what was happening in the early 1990s. What makes the Lebanon example of civil unrest is the source of the oppression for unlike in the three other countries mentioned above, Lebanon’s problem stems from outside its borders, namely, Syria. With Rue Huvelin, director Maasri elects to show audiences what tensions existed (and still exist today) within Lebanon from the point of view of the vocal university students in the capital Beirut.

The opening shot of Rue Huvelin catches the eye and mind immediately. From a bird’s viewpoint we witness a literal tug of war between a large gathering of students and soldiers just on the perimeter of the campus grounds, the main gateway to which is located on the titular Huvelin street. The soldiers consist of a massive wall of oppression against which the protestors inexorably push against. Emotions are running high, enough is enough. This moment in time is the culmination of bottled up frustrations towards a regime that is not their own and wishes them to remain quiet. The film cuts back to several years ago when Yves (Charbel Kamel), Joe-Daniel (Robert Cremona) and Wadih (Anthony Azeir) are all students at the francophone law school of Saint-Joseph, but more important dedicated activists in the struggle against the pro-Syrian regime. We witness the creation of student movements, the dangers with such activities as well as the more private moments of their lives.

Upon learning through the festival programme magazine that Rue Huvelin was to concentrate on the student point of view of the Lebanon’s most recent political turmoil (‘recent’ as in the past 20 years), my level of excitement grew. The film could have opted to study the happenings on a more epic scale, which might worked fine, but having a more intimate look into the internal Lebanese conflict seemed like a more stimulating exercise for director Mounir Maasri and his diverse cast to flex some muscles. To top it off, the film was playing in one of the larger rooms at the multiplex which co-hosted the event, usually a sign of good things to come. A little under two hours later once the film had concluded and as this movie goer walked out of the room, there was a slight air of disappointment. Notwithstanding a few missteps, there is nothing inherently wrong with the picture, but not is there anything especially noteworthy. Despite having seen the film only barely more than a week ago, I am beginning to wonder if I should have written this review a few days ago when my memory of it was fresher. To say that Rue Huvelin ‘goes through the motions’ would be a tad unfair, but for the most part, in terms of story and character development, the movie feels very safe.

Let us be fair and sate that  it does do a few things quite well. What stood out were any scenes in which Yves and Joe-Daniel were secretively discussing political matters or plotting how to further organize the student movements after curfew. There is a true sense of tension which suffocates the atmosphere. The sound of a footstep could mean a law enforcer walking up to the door, ready to arrest any who oppose the regime. Such moments are characterised by feelings of immediacy, for every second matters. The cast fairs nicely, with both co-stars Charbel Kamel and Robert Cremona delivering convincing performances. It is exciting to see youth express such vibrancy and determination in a fight for what is right, and both actors do a fine job at conveying the energy involved in such an endeavour. 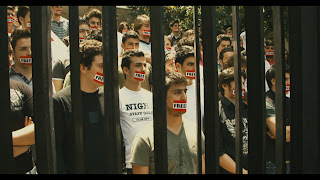 Apart from the intense preparations for upcoming demonstrations and various other political activities, the film concerns itself with some of the more personal episodes in the lives of the students. This is where Maasri’s story loses a bit of the steam it succeeded in building up. The decision to explore the private moments is understandable. It can make for a powerful statement about how the smaller personal battles are just as difficult as those which concern entire an entire country. Sadly and perhaps strangely enough, those moments do not pack as much emotion as when we are discovering the students protesting or in preparation of doing just that. A love blossoms between two characters at one point, and despite both actors giving solid performances, the romantic journey never fulfills its promise, nor is it particularly touching. Is it an obligation to have such subplots in films like these? Is not the fact that young twentysomthings are risking their freedom by conspiring against a gigantic enemy after dark sufficient for proper character development? On paper, that is more than enough for stupendous, gripping drama to emerge. There is even an attempted romantic link for the oaf-like character of the group, Wadih. Again, none of this adds anything of significance to what really matters in this given film.

Rue Huvelin is by no means a poor film. It is adequate, but therein lies part of the issue. It is adequate and nothing more. This is a shame given how riveting the subject matter is (I read a little on recent Lebanese history at university and the country has indeed experienced a fascinating if tumultuous story). A film with a bit more bite to it, a bit more emphasis on the nitty gritty aspects of the student movement would have had a more lasting impact. As it stands, Rue Huvelin will certainly impress some, retain the interest of others, but there is surely a better film about Lebanese history out there.
Posted by edgarchaput

with a large ex-Lebanese population in Australia i have no doubt this will make it's way here. sounds interesting but for me to see a documentary at the cinema i think it needs to be excellent and it certainly doesn't seem that way.

@blah: This isn't a documentary! I put the actors names in parentheses after the character names in the second paragraph. Oh well, it doesn't matter.

To be honest, I think I would have preferred seeing a documentary on the subject. It's perfectly competent, but nothing more.

damn sorry. early morning. i think i just put 2+3 together got 4, assumed the content leant itself better to documentary and read about a documentary.

edgar - i came back and read it again now im more awake. to be honest i don't remember absorbing much of your review yesterday. i must've just stared at the screen wishing i was still asleep.

i'm still not that fussed about seeing this despite it being fiction. it sounds merely ok from your review and i have limited patience/time.

despite this i'm still jealous at the quality and quantity of film festivals that come your way.

@Bla: It's just one of the little perks of living in a metropolitan area.

There are no festivals in your area?

I've not been in perth for very long but it seems to be quite lacking in things of great interest.

The Revelation Film Fest is about the biggest and best that we get and compared to most other things i read about it's not the biggest. although it did have many great films this year.

other than that there's a few minority film fests (italian, russian, french, mexican) which whilst of some interest so far seem to be more of a gimmick to promote tourism/aimed at former residents of those countries (esp italian.)

@Bla: glancing briefly at what played at this Revelation film festival you mentioned, I'd say you should take a chance on it next time. Just because a festival isn't big does not mean some gems won't be playing.

You guys had Hobo With a Shotgun. I would have loved to see that with a festival crowd instead of at home on Blu-ray.

Oh yeah I got to see 5 or 6 films there, reviewed a few too if you feel like checking them out. I had a great time. But its a perth thing, we all feel like everything here is tiny and unimportant.