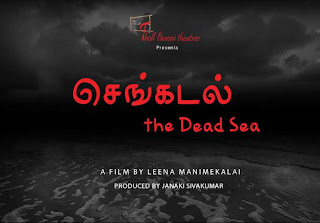 With Sengadal, Leema Manimekalai pulls off quite the triple play. For one, she arrives with her feature length debut. Second, she succeeds at filling the dual role of director and actress in the picture. Third, and arguably the most interesting coup, is that she succeeds in creating a near-perfect blend of fiction and fact. While the plot per say is an invention and the people on screen were indeed under Manimekalai’s direction, Sengadal is not only inspired by the real struggles of Sri Lankan fisherman fleeing prosecution in their home country and migrating to India, but most of the actors seen are actual people living in these incredible conditions.

Dhanushkodi, an Indian-Sri Lankan border town with virtually no security, functions as a place of temporary refuge for a growing number of Sri Lankans who have managed to escape with their lives from the horrific, unforgiving civil unrest in their native land. Once settled, if one can really consider these people to be genuinely settled, their primary economy consists of fishing. However, heading out to sea presents a host of other problems, chief among them the fact that the Sri Lankan Navy jumps on every opportunity it can to intercept these refugees at sea to murder them. Men with dreams of feeding their families and building new lives return to the shore as cadavers, and their sons, daughters, sisters and wives in turn weep for them. Local Indian police is not the most hospitable either, only compounding the stress and confusion on the displaced population. Leema Manimekalai, the real-life documentarian and the character in the film, thought it pertinent to document the hardships of these forgotten human beings, as well as show to the world their general frustration towards their home which no longer wants them, and their adoptive land which does not welcome them either. Local authorities, suspicious of her political affiliations, hold her at the local station (albeit gently. No rough stuff here), question her methods and study the footage she has captured: protests, widows sobbing over the bodies of the dead husbands, children looking for anything to do...all in the daily lives of the Sri Lankan refugees.

Leema Manimekalai deserves full recognition for this faux documentary.  The ambition alone which drove the project is enough to warrant her attention from those interested in this conflicted region of the globe as well as cinephiles with a penchant for out of the ordinary depictions of real life events.  The reality on the ground proves just as fascinating as the technique she adopts to share the story of these disaffected people.  The dedication to fishing and the scale on which the fishing expeditions occur are impressive in their own right. To see large groups of men on the Dhanushkodi beach all tugging away at one of the largest fishing nets ever as they all heave, ho and chant in virtual synchronicity, as if engaged in something far more spiritual then mere fishing, is almost hypnotic. Despite what limitations these people are condemned to work with, their determination and will to function as a unit provides some of the film’s few beacons of light amidst much of the violence and hatred that mostly characterizes the area. The willingness of some to engage in political demonstrations is yet another example of their will to survive and lend a face to a struggle that, while frequently looking hopeless, will surely never go away for good, nor should it. The more naturalistic moments of pain and pleasure serve as the most engaging portions of the picture, arguably because that is why people would want to see the film in the first place. What must the Sri Lankan refugees live through on a daily basis and how do they go about aiming for higher? 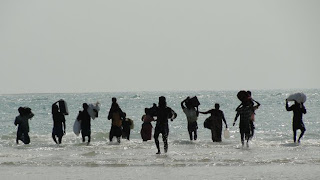 It begs to question why did Leema Manimekalai decide to blend the documentary with fictional storytelling when so little fiction is required. From a filmmaking standpoint, there may be fewer risks involved. Rather than pop up with a camera somewhere were real danger lies (not to imply that there is no genuine danger where Manimekalai and her crew took their cameras), perhaps it was safest to re-create scenes. The decision to go fictional also enables her to explore another aspect of these conflicts which tends to be overlooked: censorship. How often is media the target of heavy censorship and manipulation in such war-tone zones? Playing a fictionalized version of herself, she is able to not only give viewers an reasonably accurate portrayal of what the Sri Lankan refuges live through, but also how difficult it can be to get word out via video documentation. The most ironic aspect of this entire notion is that after viewing a cut of the film, the censor board refused to award Manimekalai’s picture the required clearance certificate for it to be distributed in theatres in her home country. For now, it would seem that the safest bet is indeed to have the film play through the festival circuit.

Sengadal is by no means an easy film to sit through. There is very little in the way of joyous moments, with most of what transpires on screen coming off as rather depressing. There are a lot of characters the viewer meets along the way and keeping track of them all is not necessarily the simplest of tasks (a social worker named Rosemary makes infrequent appearances and after a while I had some trouble remembering who she was anymore) but the main gist of what director Manimekalai tries to get across is fully understood and appreciated. This review began by stating that she had reached a triple play of successes (first film, starring in it and blending documentary with fiction). While are all indeed cinematic techniques worthy of praise, upon further reflection the Sengadal’s most important feature remains that of opening ‘s peoples’ eyes to the tragic happenings of the Sri Lankan refuges in India as well as the erupting conflict back home. That can, understandably, take precedence over any film nerd wish fulfilments any day of the week.
Posted by edgarchaput

Nice review, I have been hearing about this movie for sometime and want to watch it.

Do you know when this movie is getting released in India.

Or is official DVD available somewhere?