Shootout at High Noon: The Quick and the Dead 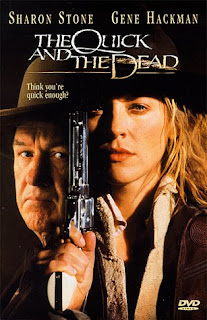 The Quick and the Dead (1995, Sam Raimi)
Finally, with this third film in the marathon, we get a motion picture that truly gets to the heart of what Bill and I are ‘gunning’ for: standoffs. We have seen plenty of gun fights (The Wild Bunch) and lots of gruesome deaths and injuries (The Proposition), but good old fashioned standoffs were consistently absent. Here is a film absolutely littered with them. Standoffs are one of the staples of the western genre and oftentimes make up some of the best scenes in movies. The tension involved in those moments can be palpable if the emotions are played right. The stares, the twitching of the fingers, the onlookers silently hoping one the other of the participants will be left standing, the frequency with which a fully developed character story arc culminates in said shootout (not just the shooter’s life at stake but those of many others in certain cases). They are the stuff of legend.
In The Quick and the Dead, Sam Raimi’s surprising venture into the western genre, a lonely cowgirl named Ellen (Sharon Stone) rides into a seemingly random little town where a shootout contest is about to occur over the next few days. The town is filled with dirty, nefarious characters, some of which have just escaped prison. The de facto mayor-sheriff is a middle-aged named Herod (Gene Hackman), who has earned a notorious reputation of owning the village’s citizens in return for letting them live. A diverse cast of characters throw their names into the proverbial hat in the hopes of being the last man standing, among them a professional killer (Keith David), a showman (Lance Henriksen), Ellen, and Herod’s son who goes by the name of The Kid (Leonardo Dicaprio). An old partner of Herod’s, Cort (Russel Crowe), now a preacher, is forced into the tournament against his will by none other than the Machiavellian Herod himself. Of course, what possessed Ellen ride into this specific town or why she continuously looks on at Herod with great interest are revealed just yet. In the first round, the winner is the shooter left standing, but by the second round, Herod has the rules changed: the winner is the shooter left alive.
Director Sam Raimi has always had a style of his own. His movies have an energy about them which sets them apart, and that energy is often found in the cinematography and editing process. His movies click along breathlessly, leaving the viewer  him or herself out of breath by the time they are done. A few years go his horror film Drag Me to Hell was released, and although it was far from a masterpiece, the pacing of the film and Raimi refusal to play by any other rules than his own were appreciated. He brings that sort of life to The Quick and the Dead, a movie so soaked up in style, a fantastic style in fact, that some other essentials are left by the wayside, an issue that shall be discussed a short bit. First however, much praise should be awarded to the filmmakers for not only gathering a fun and diverse group of actors, many of which do well in their small bits, but also making almost every shootout an event in of itself. Without any exaggerations, there are at least a dozen shootouts that Raimi gives special attention to in that they receive their own individual scenes (with so many people entering the tournament, some fights are only shown in montage). Those involving Herod are among the very best in the movie. Played with devilish delight by the great Gene Hackman, each and every one of his battles further demonstrates his qualities as a shooter, his vile nature as leader of the town and his ability to embarrass his opponents. A fine triple play for any villain in any western if I may write so. Raimi succeeds at fusing the storytelling elements into the action scenes throughout the film. Every time a fight occurs, there the character stakes are ever present, if not raised even more. Not only that, but Raimi uses some old but still effective editing techniques to aggrandize the importance of each fight, with zoom ins on the faces of the opponents, the spectators, the tower clock, etc. There are some terrific shots after the guns are fired too, such as one character have a giant hole blown into his head and another which sees The Kid’s stunned face, as if he has been shot, only for the camera to zoom out as The Kid drops to his knees in an overdramatic and theatrical statement of his superiority over the poor sucker who will not ever be getting up again. The Quick and the Dead is an example where the importance of the style is exponentially increased by the fact that there are so many standoffs. If filmed more traditionally, the movie might have grown tiresome, but Raimi is more than capable of keeping things easy, breezy and fun for the most part. There are may be an entire graveyard worth of people falling to their deaths in the picture, but the overall style of the film denotes a tone that is more cartoonish in its violence than legitimately serious. 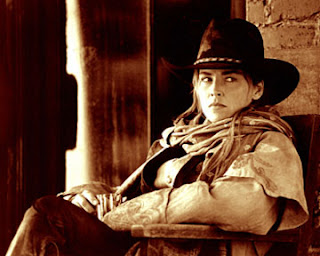 The work of the actors helps the cause as well, with greats such as Henrikson, David, Dicaprio, and the aforementioned Hackman all understanding that while they have a good movie on their hands, it is not supposed to be taken too seriously. There is a lot of posing and high talking among their characters that keeps things light enough. Dicaprio in particular shows that even back then he had a lot of charisma and could carry a lot of scenes on his own. Henrikson and David are not in the film for very long before being dispatched, but each has as much fun as they can with what limited screen time given to them. The weak links are unfortunately the two lead protagonists, the parts played by Crowe and Stone. Before venturing any further, it should be made clear that there are certain aspects of Stone’s character and performance that come off positively. For one, the film’s decision to at first give the indication that Ellen was an absolute threat to anyone around her, only to reveal later on that she herself feels that she might in over her head was an interesting move. Few westerns feature protagonists that are genuinely unsure of their own capabilities and their chances of survival, which was nice to see. Stone’s acting per say is uneven however. She gives a good ‘mean glare’ but other than that her performance is limited to looking bug eyed when under stress, looking bug eyed when surprised, looking bug eyed when furious, etc. I have often felt that even though Stone, as an actress, has a certain screen presence, it was a limited one and The Quick and the Dead did nothing to change that idea I have about her. The disappointment came from Russell Crowe, an actor I love. He feel stiff in this movie, unsure as to how to play the part of Cort. I understand that Cort, a former criminal who subsequently took a vow for God, is a complex and troubled man, but by the end nothing very conclusive about the character could be established and Crowe’s wooden performance did not assist in any way. The film also tried to push some sort of love twist between the two, but it never earns any of those moments. 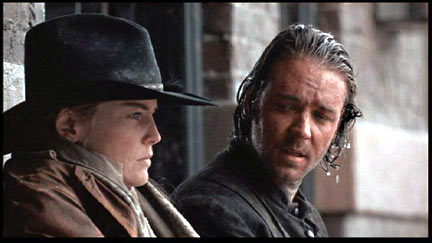 Notice that the issue of plot has not been discussed yet. Well, nor shall it. Not because it is so original that shielding the readers from spoiler territory is of the essence, but because there is virtually no story. Yes, Raimi eventually reveals what propelled Ellen to waltz into Herod’s town and pick a bone with him, but it something we have all seen before a countless number of times. In fact, the most interesting ‘storyline’ per say was the rivalry between The Kid and Herod, but because the The Kid is a minor player in the film their story is not given much time to develop. The Quick and the Dead basically serves best as a light, if violent little western that pulls some neat tricks to heighten the sense of drama involved in shootout standoffs and offers a great many character actors who relish in the small roles given to them. By the end, it is pretty clear that Raimi and his crew had plenty of fun making the movie and, more importantly, I did too.

The clock has struck. Is Bill still standing? Find out here.
Posted by edgarchaput

Glad to read you had as much fun with this as I did...