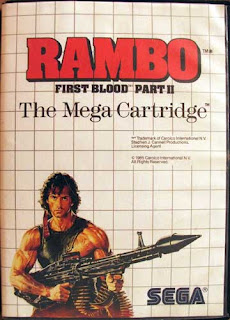 Bill, why you didn't you tell me that the horror marathon was starting early this year?

I think the strongest point you made in your review is that the Rambo franchise should have ended with the first film. First Blood may have been about the downfall of a war hero in a thematic sense, but Part II represents the downfall of that same character in wholly different sense: quality. Watching the first film caused me to wonder where the caricatures of the Rambo character came from. Watching Part II told me exactly where they came from.

I'm trying to think of  an outline for a script in which John Rambo would have been able to redeem himself without resolving to slaughtering countless skinny Vietnamese men. The best idea I could come up with would have resulted in a prison drama in which Rambo discovers his true self and learns about the foolishness of his ways, or something like that. Maybe a prison riot breaks out and instead of having Rambo lead the way, he joins the side of the guards and security forces who are desperate in wanting to tame the inmates.

Another thought that came to mind would be that some of the fellow prison inmates who encourage the riot would be Vietnam War veterans too. After joining them in their reign once they flee prison, Rambo comes to realize the stupidity of their ways and finally chooses the side of peace and order by foiling their plot of...I don't know, a life of crime I suppose. Either one of those stories could be turned into garbage, I realize that, but I think both would have served the Rambo character much better than the fake redemption which is handed on a silver platter to him in Part II.

Aside from character development issues and some unfortunately clunky action sequences, the major issue with Part II is that is wants to simplify everything. It completely turns First Blood's strongest point on its head. That movie had a character who was stuck in a rut after returning from a war that a)sounds like it was especially ugly, and b)most likely happened for the wrong reasons. That didn't change the fact that John Rambo was there, did exactly what was ordered of him, saved the lives of some fellow countrymen and got nothing in return upon his return home. Public perception of war and the mentality of a true soldier don't often mix well and they most certainly didn't mix well with regards to the Vietnam war. How exactly does one reconcile those two visions of the truth is something I don't have an answer to (although I wish I did), but it makes for good drama. Part II takes the easy route. Faceless, nameless Vietnamese soldiers and faceless, nameless Soviet all in one basket. Add Steven Berkof, who played weird Russian generals a lot anyhow, and you got yourself some people Rambo can mow down. When the movie does try to tackle the issue of bureaucrats and politicians who make the big decisions that lead to war, Part II is content with caricature. It's almost a strange movie in that it feels like many of its components are supposed to be taken seriously, but watching it I could take almost nothing seriously at all.

I don't know what I could possibly write that would plausibly rebuke points from the review you published last week, and so therefore I will refrain from even making the attempt.I spent a few days thinking, on and off, what I would publish today as a rebuttal article even though I knew perfectly well that there would be little to no disagreements. Unlike the time I had a blast free-styling that Empire Strikes Back rebuttal, Part II simply didn't inspire anything (with the exception of annoyance), especially since you hated it as well. Our reviews were very much in sync and I say we leave it at that. Of the two remaining films, I have seen the last one, Rambo, meaning that what's coming next Rambo III,  is still something of a mystery to me. We've seen one very solid action drama and one remarkably stupid dud. My fingers are crossed.

Done here? Check out Bill's rebuttal, whatever shape or form it may take this week, at the his Movie Emporium.

*The Rambo marathon will take a one month hiatus during October. Bill's Movie Emporium will have its second annual Splatter Fest and we at Between the Seats will embark on the Glory of Rome marathon. If all goes well, the Rambo will return with Rambo III on Sunday, November 7th.
Posted by edgarchaput