review: The Girl with the Dragon Tattoo 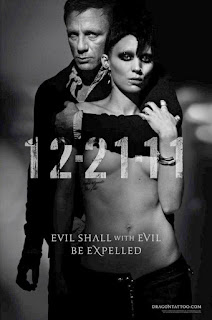 The Girl with the Dragon Tattoo (2011, David Fincher)

There are some phenomena in the entertainment industry which strike a nerve among the populace with such ferocity that it creates a 'before and after' effect. Star Wars (1977), Jurassic Park and Avatar are such films. They catch on like wild fire and never loosen their grip. It is debatable whether or Stieg Larsson's The Girl with the Dragon Tattoo book series fall in such an illustrious category, although attempting to minimize the magnitude of its popularity would be foolish. Since the first book's publication in 2005, readers have devoured the stories of anti-socialite, computer wizard Lisbeth Salander and grizzled veteran journalist Mikael Blomqvist. The cultural impact of Larsson's sprawling epics is not limited to the page, but expanded to the screen as well. In 2009, a Swedish adaptation was incredibly well received both in its native land and abroad (although its two television bound sequels were not). Now arrives the bizarre English language remake from David Fincher of Zodiac and Seven fame.

Taking course over a long period, Dragon Tattoo tells the story of the unexpectedly productive alliance between the two aforementioned characters, Lisbeth (Roony Mara) and Mikael (Daniel Craig). The latter is a goth attired private investigator of sorts, receiving payments from big industry players who want as much information as possible dug up on various competitors or other individuals which have caught their attention. At is revealed very early on that her latest subject is Mikael, veteran journalist for Millennium magazine whose most recent article, which tossed some lofty accusations towards a successful business man, proved to be complete hogwash, and although that small embarrassing detail was never Mikael's intent, his career is now in considerable trouble. It turns out that Lisbeth's investigation on Mikeal was for Mr. Vanger (Christopher Plummer), former CEO of a large and proud Swedish manufacturer who lives on a small little island a few hours outside of Stockholm who wants to uncover the long overdue truth behind his niece's disappearance 40 years ago. Officially, Mikael will be preparing the Vanger family memoir, whereas in reality, his skills as a journalist and investigator will be served to sniff who among the conniving, untrustworthy, Nazi-loving members of Vanger's family might have killed her. When the going gets tough, Mikael acquires some help in shape of the very person who had him brought to Mr. Vanger's attention, Lisbeth Salander.

Forgive Between the Seats for providing such a lengthy, wordy plot synopsis paragraph. It should be understood that if there is one thing Dragon Tattoo indulges in (both this film and the novel, which we have read), it is plot, thus making any attempts to sum up, even briefly, what the film promises, is no simple task. In this review's introductory paragraph, this movie was characterized as 'bizarre.' A bit harsh, perhaps, but why bizarre? For one, it plays a very dangerous game, one that brought upon the quick and painless death of another recent English language remake, Let Me In. Equally similar to Matt Reeves' picture, this is a remake of a wildly successful foreign language picture made very, very shortly after the original. Another peculiar touch to Fincher's version of the same story is that, unlike how most English language remakes (read: American, for the the most part) are translated, in which the setting is transported from whatever native country to the United States, the action in this film still takes place in Sweden, only the characters speak English. Fincher's track record helps us forgive the creation of this movie, with the anticipation prior to its release achieving pretty significant heights among the film fanatic community. Nonetheless, making this movie, in particular with the way the story is set, was a gamble.

Will Dragon Tattoo receive the same fate as the unfairly maligned Let Me In? Most likely not. The cast is strong and people enjoy good pulpy fun sometimes. Does it deserve a quick death like many people feverishly believed Let Me In did? Neither. In fact, David Fincher makes a surprisingly compelling and effective film despite the mountains of plot details that need balancing out. Watching and listening to the movie (meaning paying attention to the plot, the cinematography, the colours, the score, the live action sounds and so on), one feels as if Fincher, in trying to adapt Larsson's famous book, has chosen to produce a hybrid of two of his recent films, Zodiac and The Social Network. The attention the investigators Lisbeth and Mikael must pay towards the details of the case and the lengths they each to go in order to reach the truth is reminiscent of the prolonged journalistic research performed in Zodiac. Then come the visuals and sounds, which resemble, in subtle ways, the type of film Fincher made with The Social Network. There is a peculiar darkness to a lot of the picture, even during scenes which take place in very well lit locations. Sometimes it is omnipresent, other times it is barely hinted at, but that moody pastiche is there to be sure. It does not come as such a surprise as it did in his previous effort since this is, after all, a murder mystery story, but nor is it unwelcome or lack style. In a curious way, there are visual similarities between another film which came out just recently, Tomas Alfredson's Tinker Tailor Soldier Spy, which also employed a subtle, reserved, beautiful visual tapestry to help tell the story. 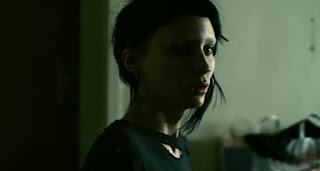 More impressive than the film's attractive pictures are the performances from the two leads, Rooney Mara and Daniel Craig. Mara has never, until now, played anything character that remotely resembled the audacious creature that is Lisbeth Salander. The difficulty in bringing someone like that to life as a protagonist is in making her the least bit believable and worthy of the viewer's attention. Lisbeth, even though society has indeed treated her poorly, is a bit of a psycho and she does not shy away from demonstrating just what sort of insanity she is capable of. Mara succeeds in making her impressive, scary, impulsive, adding intelligence, humour (albeit slight and definitely off-kilter) and enviable determination in getting a job done. The girl with the dragon tattoo is not the girl next door, let that be clear. In the capable hands of Rooney Mara, she is someone audiences can cheer for, even though she is freakishly weird. Craig is given what might be seen as the 'boring' role, the straight man to Lisbeth's flamboyancy. Appearances are deceiving in this case, since Mikael is one of the more compelling mystery story protagonists in recent memory. Considering the disastrous nature of his latest Millennium article, he would be forgiven for coming across as a broken man. This is not at all what the film has in store however, instead providing a very honest, funny, charming and cunning investigator. The teaming up of Lisbeth and Mikael defies expectations, creating a fascinating one-two punch of detecting skills. Craig's work in Dragon Tattoo just might be his very best.

Where the film falters is in its detail heavy script. The source material is entertaining, yet suffers from being overstuffed with story threads. Fincher, unfortunately, chooses not to be as economical in his storytelling as he could have been and, maybe, should have been. The scenes which set up both Lisbeth and Mikeal (prior to their unification) are fine individually, but there are so many of them and none are ever genuinely connected to each other. Mikael simply decides at one point, at least 50-60 minutes into the film, that he needs help, which leads him to Lisbeth. 50-60 minutes is a lot of time to be following two characters go on their separate ways when the audience obviously knows that they shall form an alliance eventually. Without giving too much away, there is yet another plot point which demands resolving even after our two heroes have cracked the case. Here again, the scenes themselves are fine but feel ultimately unnecessary, as if Fincher and the screenwriters were convinced that as much of the book as possible had to be included into the movie. There was certainly a way to make a perfect 2 hour long cinematic version of this story. An opportunity missed, sadly.

A visit to the multiplex this holiday season will provide a funny selection of movies. Family entertainment like Tintin, the crowd pleasing Mission Impossible, the adult minded Tinker Tailor, and the dark, at times grizzly, gritty Dragon Tattoo. No lack of choice, that much is certain. However, is it the best choice? You do the investigating now...
Posted by edgarchaput

i do agree that it was lengthy and was very detailed. i think, like you said, because the source material was just that. but i think it moved beautifully, until the end. :)

@Candice: For a director as skilled as Fincher, it was odd to see him fail at being economical. Parts of the film felt bloated, and I'm tempted to say that was the case at the beginning too, not just at the end, even though the first section does move along slightly better.