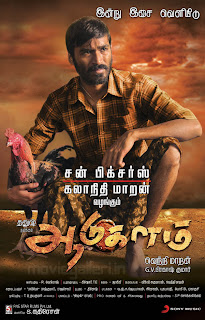 Winner of several major awards at India’s National Film Awards in May of this year, such as Best Director and Best Actor, it goes without saying Vetrimaran’s opus of ambition and hardship in the world of rooster fighting, Aadukalam,  was a major success in its native country. Movies such as these are the reason why attending events such as the Festival des films du monde is not only entertaining, but also an eye opening experience at times. If someone came up to me and said they wished to make an epic and emotionally complex tale rooted in the underground sport of cock fights, I would perhaps wish them good luck in their endeavour but want no part of such a project with such a far-fetched premise.  Then that same person would explain to me that such an activity is in fact a very important deal, culturally speaking, in many areas around the globe, namely India. That is when my interest peaks.

Wrestling to get a hold of what transpires in Aadukalam is not the easiest feat for reasons that the review shall explore later, but ostensibly the picture surrounds a small group of people who earn the most of their living by training and submitting roosters to wrestling matches. The film opens with a brief summary of how this sport has historical significance in India and is even mentioned in ancient Tamil literature, and while modern age philosophies (like animal rights movements) have meant that greater society frowns on this activity, many still partake in it. Pettaikaran (Jayabalan) and rival Rathnasamy (Nareyn), who is also a cop, are two of those people. Among Pettaikaran’s pupils in the sport are the film’s central protagonist Karuppu (Dhanush, whose character name in the English subtitles was merely ‘Black’) and Durai (Kishore), Karuppu’s dearest friend whom he amicably refers to as a brother. After some dramatic setup, a tournament is allowed to take place, pitting Pettaikaran’s best birds against those under Rathnasamy’s tutelage. However, as the tournament’s high stakes keep getting raised, Karuppu, who is somewhat brash and over-confident, decides to have one of his personal favourite birds enter the fray, thus going against his mentor’s wishes. When the bird in question proves successful, this creates friction between the once very close duo of Pettaikaran, who is highly regarded in the field, and new local hero Karuppu.

There is a lot to be said about director Vetrimaran’s award winning drama. Despite what reservations some people have towards a film which puts a decent amount on emphasis on rooster fights (which on one level might sound silly and on another level, depending on your politics, cruel), Aadukalam comes away scoring a lot of points, at times even despite itself. For anybody not familiar with this world, which I, as a young man born and bred in North American clearly was not, the film has plenty of interesting little social facets about it, many of which are elevated by strong performances by the cast. The mere importance of these fights, culturally and economically, for the people involved, is outstanding.  Some men (and the film makes it abundantly clear that this is a male dominated activity) flex their muscles to prove their worth, others hit home runs, some believe the largest penis holds sway. Well, in this little corner of the world, the absolute last thing one does is make fun of or belittle a rival’s rooster. This is supremely serious business, with money, and more importantly pride at stake with each and every passing contest. To simply discover this new universe where the culture and what makes up the values of said culture are so different from what we in North America are used to was more than enough for Aadukalam to begin as strongly as it possibly could given the admittedly trite premise.  The film gets this idea across very strongly end effectively. 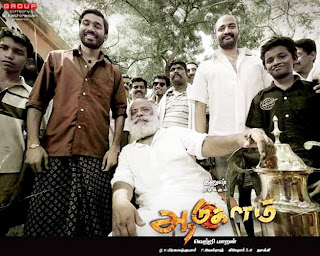 The information of how this reality operates alone does not make Aadukalam a good film but also how it was depicted. Star Dhanush has the brash good looks and that air of decency mixed some cockiness to create a reasonably engaging protagonist. The audience knows that he is an okay fellow judging by his devotion to friends and Pettaikaran, but there is another side to him that unfortunately gets the better of him. Other than disrespecting the rooster, one does not go against the wishes of one’s mentor, as Karuppu does in Aadukalam. He believes to be in the right when claiming that his unusual rooster can win some matches for his boss, and while he is scorned multiple times, he goes ahead with the plot anyways. Dhanush carries many of his scenes with the right amount of complexity to have us believe in him as a character. The rest of the cast if a bit of a mixed bag. Jayabalan, as the elderly pro Pettaikaran, is quite good, balancing wisdom earned from experience and vile temperament when things do not go as planned. There are some disappoints, the unfortunate standout being Taapsee Pannu, who plays a young woman Karuppu falls in love with, although with an utter lack of charisma one wonders why.

As stated above, Aadukalam works sometimes despite itself as well. The editing is strangely effective despite how herky jerky it is at times. Vetrimaran will oftentimes cut to another scene at a moment that feels a second too early. Some moments required just a couple added seconds to breath a bit, but the audience is whisked away to a totally different location and setting. The music also goes through this process, like when some Tamil rap accompanies ‘money shots’ of Pettaikaran’s crew as they enter the ring or as they walk down a street in slow motion, but is shut off just as abruptly as the scene was cut. Oddly enough, this added some charm to the film. When the emotions and stakes are running so high as they are at times in this movie, that over-anxious, borderline sloppy editing actually makes the movie all the entertaining. The movie also has shots with CG created roosters in the sequences when the animals really go at it, including a very Matrix-like camera shot that swoops around Karuppu’s bird before it goes for a kill. Is Vetrimaran being serious or tongue-in-cheek? I don’t know, but the overall effect works.

It can be the darndest things that take one out of a film when compared to the ones that successful complete immersion. We just talked about how the off-kilter editing made the film fun when in most instances that would be considered a significant letdown. So much of the film’s first half works wonderfully that I was ready to give the film the highest marks. 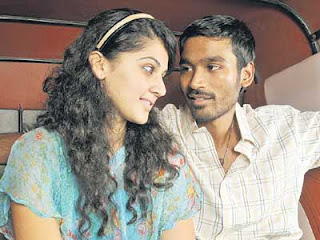 And then the second half went ahead.

It is interesting to note that director Vetrimaran won an award the award for the category that goes by the name of his job description, Best Director, because virtually all the faults that plague the second half of the film can arguably be placed at his feet. In essence, the disappointing issues with Aadukalam stem from where the film chooses to focus its story from half to half. As stated earlier, that first half, warts and all, is virtually great. The fact of the matter is that all the rooster fight focused material comes to an end by the midpoint of the picture. Once Karuppu proves himself in the tournament after disobeying his mentor Pettaikaran, the film depicts a long, drawn out aftermath of what happens afterwards. Just in case some readers believe I thought the second half to be terrible, it should be stated that there are some things that work. There is a reveal near the end, although revealed to early, that gave the film a nice sense of poetic justice, but the trajectory to reach that ultimate reveal feels laborious, like a chore. There is a women Karuppu falls in love with but because of her upper middle class status her father disapproves, there are issues with Kruppu’s mother, then issues with his figurative brother Durai, the issues with former mentor Pettaikaran, etc. Whereas the first half of the film moves along at blistering yet very satisfying pace in addition to concentrating on this fascinating world of rooster fights, the second half gets bogged down in so much plot one wonders if he or she is still watching the same movie. It is impossible to know whether the movie would have been better had it continued to explore the character dynamics mostly through the prism of the rooster fights, but if the first half worked so well, I do not see why not. It felt like director Vetrimaran decided that a film based entirely on the sport would not work, that some more mainstream, high-brow drama was required to elevate the film to another level. I disagree.

That being said, Aadukalam has more positives than it does negatives and, if it is ever accessible to you, should be discovered. At times it is very entertaining, other times even surprisingly so. It certainly loses its way to a degree in the second hour before arriving at a very solid climax, but overall can be considered a satisfying experience.
Posted by edgarchaput

It's interesting that you point to the editing because the version screened at Montreal is actually a shortened 'international version' created for film festivals.

That must explain the odd jumps from scene to scene. I thought it gave the movie a cool 1970s B movie feel, but upon reading that it won tons of prestigious awards back home, I'm guessing was not at all the vibe it was aiming for...

How long is the original version?

Most Tamil movies are around 2.5 hours in length, the original version of this one would be too. I'm impressed at the amount of research you have done before doing this review, most foreign reviewers don't do that.

@Rajesh: I honestly did not perform much research. I only visited a few web sites, one of them being Wikipedia, which a decent sized page for the film. That's not what I would describe as research.

Still, thanks for visiting.