Definitive Bond Marathon: The Man with the Golden Gun (1974) 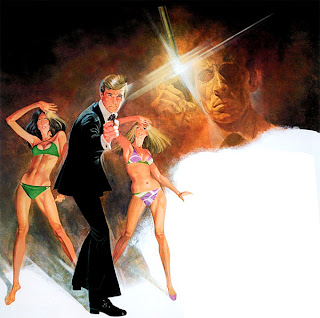 When one rescues the entire world as many times as agent 007 (Roger Moore) had, word gets about. His reputation, as a hero, but more importantly as one of the world’s greatest marksmen, earned him a dubious reputation among some less than enthralling personalities, chief among them Francisco Scaramanga (Christopher Lee) a world renowned assassin. 007’s adventure began on the day MI6 received a single golden bullet with Bond’s number engraved in the material, a clear sign that the mysterious Scaramanga wanted to challenge Bond in a duel to the death. M (Bernard Lee) subtly advised Bond to drop his current investigation of a missing solar energy conductor device and put an end to whatever personal business he had with the ruthless killer.

Bond’s globetrotting for clues, which took him from Beirut to Macao, Hong Kong and finally Bangkok, led him on the trail to not only Scaramanga, but also to a realization: that the man with the golden gun had a significant role to play in the search for the solar energy machine (baptised the Soles Agitator). He and a Hong Kong magnate named Hai Phat (Richard Loo) were in cahoots to steal the device. Bond, making use of his...several talents, seduced Scaramanga current lover, Andrea (Maud Adams), into helping discover the true nature of Scaramanga’s plan, which involved keeping the Solex Agitator for himself on a private island in Chinese waters where a dangerous new weapon was being devised. Fellow MI6 agent Mary Goodnight (Britt Ekland) even helped along the way.

It seems that, with the exception of Sean Connery and his work on From Russia With Love, every single actor who took up the 007 mantle experienced turbulence when the time came to feed off the success of their first film and create a great sophomore hit. A lot of people agree that Dalton’s, Brosnan’s and Craig’s second Bond adventures were not as good as their previous ones, but I fear that the worst case of them all was in 1974, with the Guy Hamilton directed The Man With the Golden Gun. Granted, I am member of a proud minority who sing the high praises of Live and Let Die, but I fail to imagine there being too many people who even did not enjoy that movie and feel Golden Gun is a legitimate upgrade. For those very people who do...well, I guess we just do not appreciate James Bond movies in the same way. As in, not at all in the same way.

We are in a bit of a sluggish period in the series. YOLT is fun if pretty stupid, OHMSS impeccable, DAF is a total misfire, LALD breathes some life and now TMWTGG drags things back down again. The name Tom Mankiewicz has come up a little bit over the past few weeks in my reviews and for good reason. The man simply had a very particular way of writing 007 scripts. He cannot get enough of the one liners, always adds a last minute fight sequence at the end when the viewer thought the danger was vanquished, loves villains making use of natural resources to created absolutely ridiculous weapons of mass destruction, and has this insatiable urge to have Bond always linked to the U.S. in some fashion, be it by actually operating in the country or by having an American tag along with Bond. Save LALD, I am not a fan of the Mankiewicz scripts (and LALD does not have a perfect Bond script by any means either). The guy has these awkward sensibilities that he cannot let go of. People say that Bond films are predictable and stupid? I honestly think the last three movies play a huge role in perpetrating that annoying snub exercised by the franchise’s haters. You know what, if they watch this movie at least, those haters have a strong case for their arguments. In Golden Gun, a lot of the goofiness and ‘oh, please!’ moments the franchise is frequently called out for reach an apex of sorts.

Consider this. Bond, masquerading as Scaramanga in order to get closer to Hai Phat (apparently nobody knows what Scaramanga looks like, so he takes a chance and presents himself as the famous yet mysterious killer), has been invited by the latter for dinner one night at his lavish estate in Hong Kong. Bond arrives, walks through an elaborate garden and is attacked by two sumo wrestler who were posing as statues. Obviously, Hai Phat has clued in on the fact that Bond is not Scaramanga and has opted to liquidate the secret agent, but this is how he goes about it? By tossing a couple of sumo wrestlers at him? Oh, I’m sorry, a couple of sumo wrestlers pretending to be statues. Right. So, Bond takes care of one, but the other grab him in some sort of Japanese bear hug to crush his back. 007, quick thinker that he is, grabs the bloke’s sumo tights and twists them hard. The wrestler winces in pain, letting go of Bond, who is then knocked unconscious from behind by Scaramanga’s midget butler Nick-Nack (Hervé Villechaize). Yes, Scaramanga’s midget butler.
Things only get worse from there, trust me. Bond awakens a few hours later at a karate school where he is to be pummelled by some of the top students. I mean, just kill the man already and be done with it! This is only the beginning of the absolute worst sequence in the entire film, possibly of the franchise (although that latter opinion can be debatable), where Bond is literally rescued by teenage girls who out karate-chop all of the older students, engages in a boat chase which pales in comparison to the insane one from LALD and, guess what, features the return of Sergeant J.W. Pepper (Clifton James). A temporary return at least, thank the heavens, but, really? Why in a million years would he and Bond meet up like that? This is what we’re doing for a new Bond adventure? 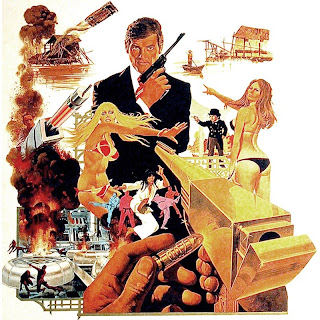 I shan’t go on spoiling scenes of the film. Even with regards to films I dislike I prefer to have those curious enough to watch them make the discoveries for themselves. Suffice to say that, of the movies we have watched thus far in the marathon, Golden Gun practically takes the cake in how it fails to raise any stakes whatsoever. Absolutely nothing feels important in the movie, and, consequently, little is of genuine interest. Sure, Roger Moore is back, and he is always smooth as butter with some of the pithy retorts, and virtually all of the women appearing on screen are stunning, even those who only spend a few minutes with Bond (like the belly dancer in Beirut, played by Carmen de Sautoy), but after that virtually nothing is left. In fact, the way Brit Ekland is used is borderline embarrassing when one takes a moment to think about it. She is a blond, so let the producers make her an idiot and hopefully the audience will laugh at her antics. Really original, guys. Maud Adams, who we shall see again later in this marathon, is a solid actress, and one can tell that she, at least, is trying to do something serious, but when one is given nothing to work with, then nothing much will result. 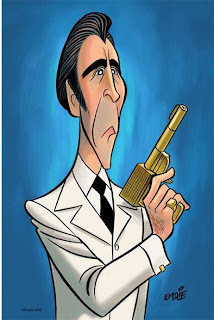 By my count Bond is in 4 different states in the first 30 minutes (England, Lebanon, China (Macao) and Thailand). Globetrotting in of itself is not a bad thing in a Bond film. On the contrary, it is one of the franchise’s great appeals, but rapid succession of rushing from one place to another actually encapsulates, albeit unwillingly, one of the problems of the film. That lack of importance. Get Bond to point A, tell a joke, usually a poor one, then off to point B, but not for too long because we have to get to point C in a little bit, etc. I know that for some this moment happens earlier in the franchise, but for me it is here with Golden Gun that the franchise stumbles and is essentially playing as a joke of itself. DAF felt like a joke of a movie, but TMWTGG feels a deliberate parody about Bond. I mean, the guy is supposed to be a secret agent and it seems as though every second person in film knows exactly who he is! As some of you know, I am a purist. I take this franchise seriously. I am a die hard. When a film turns like this one does, I am not a happy camper.
Some will say that Christopher Lee’s presence manages to prevent the boat from capsizing entirely. Lee is one of the all time greats, no questions asked. And, yes, he is charismatic in his villainy in Golden Gun, I shall concede that much. There are two critical issues that remain however. The first being that an actor can only do so much with the material awarded to him. Do I think Christopher Lee is interesting as the titular enemy? Yes, I do. But he cannot save this ship, just like Liam Neeson was not going to save Clash of the Titans. The second element is that, until the second half of the picture, Scaramanga is practically a non-entity. It is only by the 1 hour mark that his role takes on more importance in the...story(?).  We can never know if more scenes featuring Lee would have improved the quality of the final product, but one can dream.

Like with every single Bond film, I could write a book about what I like and dislike, I just do not feel like discussing about Golden Gun very much. I think I have been clear as to what I feel about this movie and why. Like in any of the reviews, especially with Bond, I could go on for a long, long time, but I fear this article would just get bogged down in negativity.

Well, I like The Man with the Golden Gun, a childhood fave, I haven't analyzed it like you have, and its certainly not perfect, yet I think its great fun with many memorable moments.

I guess I am the opposite to you then, and prefer the Bond films that are less serious and more humourous with Roger Moore being my fave Bond, who I grew up watching. I agree that Christopher Lee is a great villian. I think when it becomes dark, in the case of for ex T Dalton in License to kill, then it loses its soul somehow for me. Indiana jones also had that tongue-in-cheek humour I like.
Its all a matter of taste,no one is wrong or right for liking this or that, you know what they say, people have a favourite Beatle ( :

@My father is a big Roger Moore fan and, like you, enjoys the Bond films he starred in the most. There is a sense of the ridiculous to every Bond film, even the most serious ones, so it does make sense that some would take an openly comic-booky route, like TMWTGG. However, I'm of the mindset that the best Bonds are the ones that do try to ground the character the most. I like that balance between the adventurous and the serious.

The world of Bond is pretty fantastical when taken as a spy series, there are so many things about it that make it more pulpy than most other spy films, so I tend the opportunities taken to balance things out.

There's a chance you qualify for a new solar rebate program.
Click here and discover if you qualify now!