It was written in the general review for the film how disappointing it was for the character of Ripley to return not as her true self, but as some of sort clone variation. It always seemed to me that 20th Century Fox, in wanting desperately to make another Alien film, were caught between a rock and a hard place.
Ripley commits suicide at the end of Fincher's third episode by jumping into a pool of molten lava. Among the questions posed during the writing processing, one imagines, were: 'How do we bring Ripley back or do we need Ripley at all?' Controversial material for anyone involved with the franchise and most certainly a touchy subject among the fans. At the point where a fourth one was to be made, was it feasible to go ahead without Ripley? A good writer arguably could have pulled the job off well enough. After all, it is known among fans of the series that as far back as the pre-production of Aliens, only the second film, there were discussions of continuing the story without the involvement of Ellen Ripley. By the fourth however, it might have seemed a little strange to suddenly have a film without Ripley, but on the flip side people at Fox wanted another Alien picture. See what we mean by a rock and a hard place?


The result is, forgive the atypical vulgarity, a half-assed one. Ripley is 'sort of back', yet in a way that does not take advantage of Sigourney Weaver's capabilities to inject rich emotion into her performance. That is what disappoints the most about Alien Resurrection, the fact that even though a familiar face has returned, it never at one point throughout the entire film feels as though the viewer is tagging along with the same character they did for three entire episodes. It is as the script dictates: a hollow reproduction of Ripley, not Ripley herself. By default, Weaver gives her less inspired performance in the series. Not that much blame can be laid at her feet, she is but doing as the script (written by non other than Joss Whedon. I doubt his staunchest supporters would approve of this script) and director Jean-Pierre Jeunet are asking of her. The problem is, what they are asking for is not terribly interesting. It feels as though the film is trying, whether intentionally or not, to pass the torch from Weaver to Ryder, who plays an android. It is not a bad move per say, although not many would be convinced that Ryder carries more or even as much screen gravitas than Weaver, hence even that story-driven objective, provided that it is what the filmmakers want to accomplish, is a letdown in of itself.

For all of the film's script related weaknesses, there are tiny moments which, short as they may be, that help make the plot somewhat bearable. Acknowledging that we have but complained ad infinite about the Ripley clone subplot, it does, admittedly, lead to a very cool scene when, as Ripley and the surviving smugglers make their way through the complicated passageway of the scientific space craft, they discover the laboratory in which the Ripley clone was artificially given birth. In this room are all of the previous, unsuccessful attempts at cloning Ripley, one of which are in fact still alive. Visually, the scene is arresting for its bleak, science-gone-haywire mood, as well as provides one of the film's precious few emotionally driven scenes. In this one instant the Ripley clone feels something. Up until this moment she has behaved with less character than any android seen in the entire series, nut now, standing face to face with her relatively short history and what it has meant to her less than fortunate predecessors, her emotions, begin to slip in. It is a genuinely good moment and Weaver gives it her best shot. It's just too bad the rest of the film is nearly void of any other such moments.

I like Ron Perlman. He is a far better actor than I think studios have ever given him credit for. He is rarely the lead in a film, often relegated to playing either a supporting role or a villain, and oftentimes when he is a protagonist, he is a protagonist with some serious issues. In fact, two of the few films which spring to mind in which he is the one true hero of the piece are the Hellboy films. Ah, that's right, he is covered in prosthetic makeup in those films... Ron Perlman is another example why Alien Resurrection is mostly a failure in virtually any department where script is concerned. Here is an actor who can lend a role a surprising amount of charm, wit and gravitas, yet he is relegated to playing some vulgar slouch without any sense of character. Even his role in Drive, in which he plays another grade A jerk, had a sense of character to it. As much as the treatment of Ripley and by consequence Sigourney Weaver feels like a crime, much of the same can be argued about Ron Perlman's useless, thankless role.

There are some positives, almost all of them derived from the visual side of the production. Jean-Pierre Jeunet, not one to make movies with ordinary stories or ordinary aesthetics, has an eye for some fun visual cues. There are plenty of moments in Resurrection when one cannot determine if they are meant to be funny, gross, amazing or horrific. Familiarity with Jeunet's style as a filmmaker leads one to believe it is probably a healthy mixture of all four possibilities. The extended cut of the film opens in a completely different manner than the 1997 theatrical release, wherein the picture frame is overtaken by a monstrous set of teeth. As the camera pulls back, the teeth are revealed to the that of some kind of beast. Pulling back further still, the beast is nothing more than an insect standing by the window in the cockpit of a space craft. The pilot, having now detected the insects presence, squashes it, puts it in his straw and spits it out , splashing onto the window. What in heaven's name is this doing in an Alien film is anyone's guess, but it is very funny and tremendously playful. Another moment which may be aiming for laughs or earn them unintentionally is when Dominique Pinon's wheelchair condemned character notices an alien crawling above, visible through the gated shafts. Mixture of terror and courage, he pumps up his shotgun and takes fire upon his would be attacker. The bullets tear some of the creature's thick skin, thus releasing a droplet of acid, which slowly oozes through the shaft and onto Pinon's ear. Again, it is unclear whether this is supposed to be funny or not (yet another one's of the film's problems. It either a- is unsure or b-has intentions of being funny but realizing this is an Alien film wants to pull it back but not all the way). Nevertheless, amidst the dreck, little moments like these are more than welcomed. 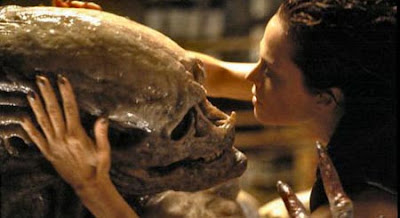 Obviously the two most talked about elements of the film, perhaps the only talked about elements of the film, is the underwater sequence and the alien/human hybrid. One of these is very cool and the other less so. I've never tried to take the pulse of Alien fans in the hopes of understanding which of these two ideas they more readily accept. One suspects it is the underwater sequence. Considering that the beasts can evolve with the characteristics of whichever animal they sprout out of, one can safely assume they are also equipped, by instinct most likely, with the skills to survive most environments, including wet ones. That being said, after tree films, because the only time an alien has been seen dealing with water was the iconic Aliens moment when one such warrior emerges out of the sewage water behind Newt, it never really dawned on me at least that these things could swim. Therefore, when Ron Perlman turns back as the gang is swimming from one end of a room to the next and notices not one but two alien hunters rapidly catching up with them, it comes as a genuine surprise. The fact that the sequence transpire under water adds another layer of tension given that the character must reach the other side before running out of air. The fear of being caught up with the aliens means they dispense even more energy, in all likelihood releasing some air in the process...it's all handled rather nicely I must admit.

The human-alien hybrid is executed with less skill unfortunately. Interesting enough, reading up on the history of the franchise, one learns that the idea of the human-alien hybrid was in the minds of screenwriters during some of the many failed draft attempts for Alien 3, not Alien 4, hence the idea originated a long way back, even by the time Resurrection was made. As a visual effect it works decently enough, even though it pales in comparison to anything we have seen up until then. It seems like the filmmakers are hoping that because the creature exhibits even greater semblance to humans it will comes across as scarier than the typical franchise foes, but that doesn't work. The titular aliens are scary (less by the fourth film, mind you) because they are somewhat difficult to make out, to understand physically and biologically. What we do not know instills fear into us, hence the human-alien baby fails to creep us out enough. As part of the plot, well, its purpose is not clear. A bastardized monster which originated from the fact that Ripley's DNA gave birth to a queen alien, therefore said queen possessing the ability to somehow give birth to this defect? Fair enough. In some ways it also mirrors the existence of the Ripley clone. Just as she is but an imitation of her real human counterparts who cannot fit in, the newborn is a terrible imitation of its peers and thus no more fits in than its grandmother can. An interesting idea, but the film does not really do anything with it. Like the other nuggets of potential, it gets lost in the sea of mediocrity.
Posted by edgarchaput