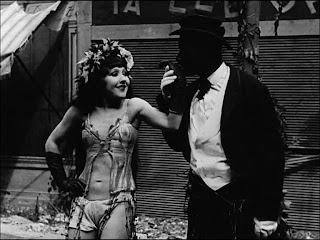 Director Jean Renoir is certainly better known for his much beloved feature length films, less so his short films, which makes this section of our marathon a bit unique. Truth be told, I wasn’t even aware of any Renoir short films until a short while ago. Keep in mind that Sur un Air de Charleston was still made early in his career, so there are some familiar aesthetic, editing and casting choices. The primary familiar ingredient is of course one of the two lead actors in the film, Catherine Hessling, who, while I do think she could act, was obviously still benefiting from her marriage with the man behind the camera. Either that or Renoir still wasn’t supported by a large enough budget to search for any different stars.

Regardless, in this current entry of our marathon she plays something of a dancing hooker hanging around the streets of a post-apocalyptic Paris, known as Terra Incognito, with her pet monkey (played by someone in an adult sized primate costume). Somewhere in Africa, where civilization has survived and technology seemingly thrived, an explorer is sent to Paris where he encounters the young street dweller and is seduced by her energetic, impressive and sexual display of the famous Charleston dance.

Sur un Air de Charleston is a delightful little effort from Renoir. It is partly a clever twist on colonial history while also an exquisite dance video. Yes, I wrote that last part purposely, fully aware that director Jean Renoir could never have envisioned the MTV music videos that characterise pop culture in our day and age. I say that this short film functions as a dance video because of not only how the overall story is told mostly through dance, at first by the girl’s solo effort and subsequently by a back and forth duo performance, but also in how the director’s camera and editing simply admire the physical dancing prowess of the two leads. Much like with the previous film we looked at in the marathon, Renoir plays around joyously with the speed and editing of certain moments in the movie, and it’s all handled handsomely. For instance, upon first discovering the street dweller, the African explorer is stunned by the girl’s incredible and sensual abilities, which are shown in slightly faster speed than normal in a filming technique that suggests her skills are too complex for the protagonist to fully comprehend. Upon being invited by the girl to partake in a dance with her, we see the explorer make a few sloppy attempts at mimicking her moves. Once he grows more comfortable with the tempo and style of the Charleston, both characters are really getting their groove on, at which time the speed of the motion picture drops into slow motion. For a good few minutes the audience is awarded the pleasure of admiring the purity and joy of their dancing (dare I say the explorer even dances better than his young teacher). It’s a wonderful technique not only from a purely visual standpoint but also from a storytelling one: fast dancing equalled confusion whereas slow motion indicated that both were completely in their groove and feeling the vibe of the Charleston.

As I briefly mentioned at the start of the above paragraph, Sur un Air the Charleston serves as a neat twist on history as we know it. The film’s plot transpires at some point in the future in the years following ‘the next war’, a war that has reduced Europe, from what the viewer is allowed to see at least, to a poor and underdeveloped region of the globe. It is ironically in Africa where technology has continued to thrive as is suggested from the simple fact that a man is been sent off to Europe via some sort of sophisticated hovering sphere that can be piloted by one man. Apparently, and without giving away too much, the explorer can communicate with angels via telephone. So clearly, Africa is now in the driver’s seat when it comes to civilization in the universe of Renoir’s short film. The protagonist is also an explorer, looking for signs of civilization in another continent. Following his encounter with the street dancer and his appreciation of the ‘dance of the White people’, he opts to bring her back to his continent and show her off to his superiors. In this vision of the future, the tables between Europe and Africa have been turned completely. Is this a bit of social commentary on Renoir’s behalf regarding his country’s colonial past or might this simply be a clever creative device he chose to utilize in order to tell an amusing tale of two different people and cultures coming together? A case can be made for both, although I think one would be hard pressed to completely ignore the first notion. The film is of course too short to develop this notion of the world turned upside down any further (if it was interested in developping it at all in the first place), but I admired Renoir's attempt at doing something that must have felt at least a bit provocative back in the day.

I think that Sur un Air de Charleston is a very good example of a short film done right. To tell a complete tale with fully developed characters, story arcs and themes in such a limited running length must be quite difficult. Somehow Renoir manages to do just that within a brisk 20 minutes, and even then he makes the viewer think a little bit by constructing a near future in which the historically well established hierarchy of the continents as we know them have been entirely reversed. But even at its most basic level the film offers plenty of entertainment value, especially if you’re into dancing. And who doesn’t like movies in which an actor puts on a man-sized monkey outfit?
Posted by edgarchaput