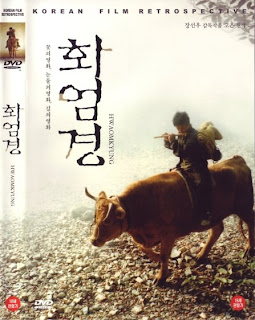 Sun-Woo Jang's Passage to Buddha is a unique piece of work. It starts out as a film which seems ordinary enough. A main character, a simple narrative, a goal that main character wants to reach, etc. But the director, who also wrote the script, has far greater plans in mind for his story. This is a case where a film becomes a vehicle for something else, something larger than a simple narrative. I don't mean such a comment as a criticism per say however. Jang isn't spoon feading his viewer with any political ideals of any sort. Rather, his film is in fact the telling, through characters and encouters, of a spiritual quest.

Following the passing of his father, a young boy named Son Je (Tae-kyung Oh) sets out on a quest to find his mother. He has no idea where she may be and how to find her, but he is quite the determined little lad. As soon as he meets a certain monk in a restaurant however, the nature of his voyage morphs into something different, more philosophical and spiritual in nature. The monk, after having offered some religious like doctrines which the young boy does not understand, suggests that he travel to the sea side, where a doctor lives and who may be able to help him attain his goal. As long as Son Je believes, he will eventually find his long lost mother.

Soon, it becomes clear that Son Je is not even on a quest to find his physical mother anymore, but rather has embarked on a journey of spiritual enlightenment. His journey becomes an educational experience that only the wise could fully comprehend. Knowing little of Buddhism, all I can say is that the film is meant to be a fictionalized telling of the Avatamsaka Sutra of Buddhism, which relates to the interdependent phenomena that makes the universe what it is, and of course the passage to full Enlightenment. Sun Je at first is seemingly devoid of any real personality, other than being said at the loss of his father. As the movie progressed, I began to see the young boy as a blank page, one that upon which those he meets along the way will imprint their thoughts and knowledge of the world. Feelings, goals, beliefs, the birth and death of the world as we know it, these are but some of the issues that are elaborated on. But the elaboration of those subjects is not done in very rudimentary ways. Instead, each conversation held with a new character, each bit of knowledge gained, is a little step towards Buddhism, or Enlightenment.

For these reasons, it becomes difficult to evaluate such a film. Does one criticize the story because its characters are nothing more than vehicles for forwarding Buddhist teachings? Does one fault the principle boy, Son Je, because he is somewhat devoid of any personality and whose existence seems restricted to intaking all this information? Perhaps, but I choose not to. For one, it becomes clear that, as the story progresses, Son grows more and more mature. By the end of the film, he is no longer the little boy we met at the beginning. He may share the same physical traits, but intellectually and spiritually he has grown exponentially. Director Sun-Woo Je also balances all these elements deftly. There is almost a fantasy, or dream like quality to the film that suited the journey well. Some of the boy's encounters are downright peculiar. While he does not grow physically, a girl he crosses near the beginning of the story grows into adulthood as she reappears throughout (he also plants the sees for her child). Another young lad about his age he meets at an observatory demonstrates a remarkable understanding for the nature of the universe and the planet we live on. With these scenes in mind, I wouldn't say there is necessarily a playful element to the picture, but there is certainly something fantastic about it, and I believe it prevents the movie from falling into ridiculousness. Not only is the director taking his character Son Je on this journey, but he is inviting the viewer join along. All in all, I was very pleased with how the film turned out and enjoyed the aesthetic and narrative qualities, unorthodox as they may be.

I was impressed overall by this piece of cinema. Perhaps I was simply drawn in and convinced of its qualities because I know so little about Buddhism and accepted what was said all too great an ease. Maybe someone more versed than myself in the Avatamsaka Sutra could refute what occurs in the film. When it comes to religion, just like in politics, there is always someone, somewhere, seemingly willing to rebuke another's expressions or thoughts. I'm therefore more than convinced that there are people who could rip this movie apart for all kinds of reasons, credible and non alike. However, I can only judge the film from my own limited perspective and I have to say that, as odd as the story is at times, it was a unique experience.
Posted by edgarchaput

Good day. I was impressed with your article. Keep it up .
You can also visit my site if you have time. Thank you and Bless you always.